Monday night’s result against Fulham confirmed what most expected this season – Palace are going to be involved in a relegation dogfight. With every point vital even at this early stage, the Eagles are going to have to battle and scrap their way to pull themselves away from danger. It’s a situation Marouane Chamakh isn’t used to, but he’s relishing the challenge.

This time last year Marouane Chamakh walked out of the Emirates Stadium with the Champions League theme blaring out from the speakers. It should be every footballer’s dream, to play on Europe’s biggest stage, but for the Moroccan striker he would once only have a watching brief from the substitutes bench as Arsenal lost to Schalke.

Within touching distance of playing a starring role on big European nights, the 29-year-old was relegated to League Cup duty and cameo roles from the Gunners’ bench. Having played for top teams in France and England fighting for titles, he decided a new challenge could rejuvenate his career at the other end of the table.

Today sees Chamakh’s past and present collide. A star-studded, free-flowing side filled with confidence arrive at Selhurst sitting on top of the Premier League to take on an Eagles side still attempting to get to grips with their new surroundings. But for Palace’s number 29, the decision to move was easily justified.

“I’m delighted to be here now and to be playing much more regularly,” he said. “I came here to enjoy being on the pitch and to show what I can do. I’ve made many sacrifices to be here and it’s different to where I’ve been before but I like it a lot. It’s a really good atmosphere which I enjoy and I will do everything to help the club stay in the Premier League. 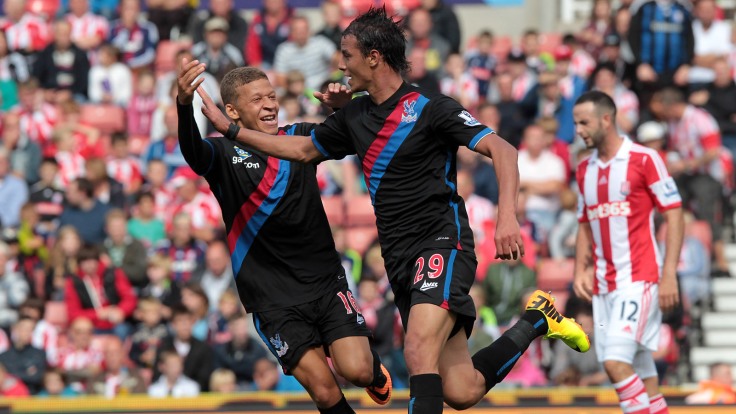 “I think we have had three or four good performances which we should concentrate on because it’s difficult at this level. Against Tottenham, Stoke, Swansea and Manchester United we played really good football but didn’t get any points so we have to play a bit smarter. Sometimes we play too much with the heart but we need to play with both heart and the head. At this level you have to play with both.

“It’s a new challenge for me compared to Arsenal. At Arsenal you had to win every game but here if you win one game in every three it’s very good. Both try to play good football and take maximum points from every game but at Arsenal we didn’t concentrate on the opposition whereas here we adapt our game regarding on who we are playing.”

Born in the south-west of France to Moroccan parents, Chamakh began his professional career at Bordeaux where he made his name in the game. Eight years at the Ligue 1 club yielded 76 goals and a famous domestic treble in 2009. Numerous clubs from around Europe, and mainly the Premier League, were interested in snatching him away from the Stade Chaban Delmas when his contract expired the following season, but there was only one option.

“I dreamt when I was younger that I would play for Arsenal and I did it. It wasn’t easy because we were under pressure to win every game because I was playing at the top level, a point from a game wasn’t enough, it was always about taking maximum points. I saw that and put it in my mind and worked hard and gave my best for my teammates.

“I started very well during the first six months but when Robin van Persie returned from injury we were only playing with one striker so he was first choice and I was on the bench, but I couldn’t say anything because at the time Robin was one of the best strikers in the world.

“However I scored a lot of goals and provided plenty of assists so it was a good season but there is still a small pain in my heart because we lost the Carling Cup final against Birmingham City.”

Despite that surprising defeat to The Blues at Wembley, Chamakh had made a good first impression at the Emirates, netting 11 goals and providing eight assists in all competitions. But instead of having the chance to kick-on the following campaign, the arrivals of Gervinho and Alex Oxlade-Chamberlain saw him fall down the pecking order.

Just 19 further appearances followed before more hurdles appeared when Lukas Podolski and Olivier Giroud were given the chance to fill the huge shoes left by van Persie’s transfer to Manchester United, and seeing no light at the end of the Emirates tunnel led the striker to look for further playing chances in the capital, but a loan spell to west Ham United would prove to be another backwards step.

“In my second season RVP was on fire so I played just a little at the end of games and in the Carling Cup. I wanted to play but I couldn’t do anything as I knew Robin was better than me so I respected the decision of the manager.

“Moving to West Ham was a bad decision. I spoke to the manager in December and he said he wanted me to play regularly. At this time Andy Carroll was injured and so I started three games but Carroll recovered and I didn’t play one more minute which was bad for me because he lied to me as he said we would play together. I think he was only thinking of himself to make sure the club stayed in the Premier League and get himself a new contract. He should have been honest with me.”

Even though his Arsenal days are over, Chamakh still holds a special place for the Gunners and is delighted to see them race to the top of the Premier League table as they aim to put an eight year wait for silverware behind them.

“I think they have a great chance of winning the league this year and I hope so too. I’ve watched them a lot this season and have played well, including defensively, and if they stay like that they can win something this year.

“I am looking forward to seeing some of my old friends when we play them because when I left the feeling was still very good between myself and their players. 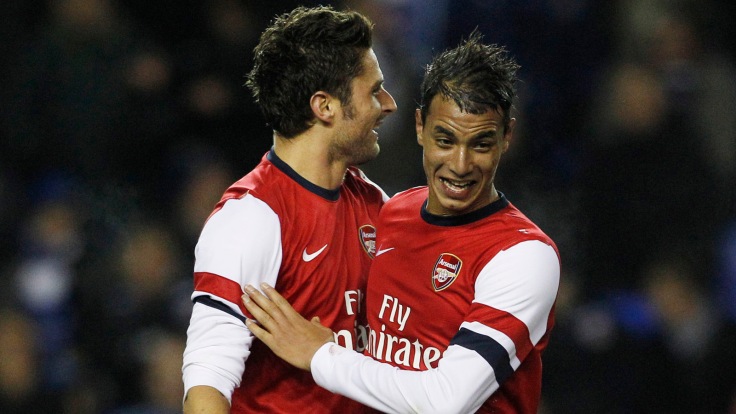 Despite seeing him limit his chances in the first team last season, Chamakh is also full of praise for the north Londoner’s latest hotshot. Having struggled last season, Olivier Giroud has found his feet in England’s top flight and has the Eagles striker’s sympathies regarding adapting to new surroundings.

“For French players coming to the Premier League, when you join a club like Arsenal it is easier because there are more French players there and the manager is as well which helps you introduce yourself easier so you can be more prepared earlier.

“It’s similar here now to when I was at Arsenal as we have a few French speakers (Jimmy Kebe, Adlene Guedioura and Elliott Grandin) and we can talk and have a laugh together which is good.

“Giroud’s started very well and it’s his second season there so I think he learnt a lot last season which has helped him this season so I think he’s ready to give 100% for Arsenal.”

However his Arsenal affection will end at 12.45pm today. Having opened his Palace account with their first goal back in the top flight at Stoke City, Chamakh is hoping to score his first in SE25 sooner rather than later, and would like to haunt his former side for the good of his current club.

“I’d love to score against Arsenal, especially at Selhurst. The fans are really amazing and I love that and when we play in that kind of atmosphere you tend to give a bit more than 100%.

“They’re a really good team so we have to be careful against them because they’re playing well and are quick to attack and get plenty of crosses into the area so we need to defend really well from the front. If we took a point from the game that would be a great result for us.”