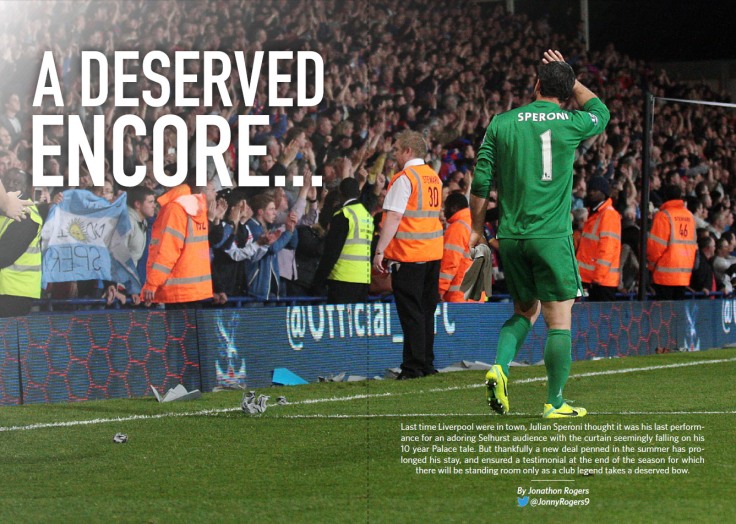 Last time Liverpool were in town, Julian Speroni thought it was his last performance for an adoring Selhurst audience with the curtain seemingly falling on his 10 year Palace tale. But thankfully a new deal penned in the summer has prolonged his stay, and ensured a testimonial at the end of the season for which there will be standing room only as a club legend takes a deserved bow.

At the culmination of last season’s incredible clash between Palace and Liverpool, two South Americans were visually emotional. As Luis Suarez and his tear-soaked shirt fled down the Selhurst tunnel, moments later Julian Speroni and his Palace team-mates emerged from it for a deserved lap of honour.

As he made his way around the pitch, the 35-year-old truly believed that these could be the final stud marks he would press into the hallowed turf. The Eagles’ number one did his best to hold back his emotion, but his anguish was quickly picked up on by the 26,000 in attendance, and what was meant to be celebration of the whole squad’s triumphs over the course of nine months turned into a show of appreciation for a decade of service between the Palace posts.

There was hardly a dry eye in the house a night later at the Fairfield Halls when Speroni was handed the club’s Player of the Year award for a record fourth time, and it seemed destined that Suarez and Speroni wouldn’t cross paths this season. Thankfully for all Eagles fans it’s the Uruguayan rather than the Argentinean who is plying his trade elsewhere after a new contract ended the uncertainty and continued a Selhurst legacy.

On that famous May evening against the Reds, Speroni said: “That night was probably the most emotional game during my time here. As a club we’ve been through ups and downs, happy memories and sad memories, but that night I really thought it was going to be my last game for the club at Selhurst.

“The first thing that made it special was the adrenaline of the game due to us being 3-0 down and coming back to draw 3-3 but as I thought it would be the last home match of my Palace career I was very emotional at the end. The reaction of the fans was incredible and I can’t thank them enough for that. It’s something that will stay in my memory for a long, long time.

“The Player of the Year night was the icing on the cake and the culmination of a fantastic season and the reaction I received from the fans, I still can’t believe it. I didn’t know I was going to get a testimonial year until I signed the contract in the summer. Once we got everything sorted it was a big weight off my shoulders and when I knew I was going to be a Palace player for the next season it was a great feeling.”

In this day and age of professional football, testimonials are few and far between but if anyone deserves one after persevering and surviving the rollercoaster that has been Crystal Palace Football Club over the past decade it’s Speroni. Promotion, relegation, administration and jubilation have all been enjoyed and endured, but the Argentine is still standing.

It promises to be a special night in the history of the club on the 26th May when Speroni gets his tribute game, but he feels it will be as much an event for those in attendance rather than the headline act.

“I want it to be something special that everyone remembers, it would be the end of a great love story really!” he said. “I’m really looking forward to it; the fans have been unbelievable towards me so I want the testimonial to be a big thank you to them.

“When I signed my previous contract it was mentioned to me but I never really thought too much about it, but when we were getting to the end of that deal I started to. I have great people around me and we’ve formed a committee of great friends and people who care for the club and care for me too. I’m really pleased about that and they’re doing a fantastic job.

“We’re not sure about the opposition yet, we’re considering different things and bringing ideas to the table and then we will make a decision but I want it to be something that people remind me of in years to come.”

Fans are already speculating as to who the opponents could be. A clash against his former club Dundee? Maybe an Argentinean-select side? Or perhaps a star-studded Speroni XI featuring his favourite team-mates from his time in SE25? When I pressed him to choose three shoe-ins for the latter, he was his usual diplomatic self.

“That would be harsh, I can’t name just three because I think I’d upset a lot of people and rightly so because I’ve played with so many good players here. I would love to bring some of the old players back, whether it’s to play or just to be there because they all played an important part of my time at Palace so it would be nice to have them there.”

Usually a testimonial celebrates the culmination of an icon’s time with a club, but that doesn’t seem to be the case in this instance. Having continued to keep Wayne Hennessey at bay despite his international heroics for Wales this season,Speroni continues to shine between the sticks.

He made his 360th Eagles appearance in the defeat at Old Trafford, meaning his Palace career really has come full circle – back in the Premier League facing Merseyside opposition, just like game number one against Everton in August 2004.

He also completely disagrees with the ‘old dog, new tricks’ adage, continuing his quest to improve his game on a daily basis and keep himself ahead of his rivals. Good news Palace fans – Speroni isn’t planning on disappearing into the footballing wilderness just yet.

“I’m quite pleased with my form this season, I’ve been unlucky with some of the goals we’ve conceded with deflections and things like that but overall I’m happy. The penalty save against Burnley could be the highlight but there are other things that people don’t notice which please me more than saves, such as my starting positions for crosses, and how I help defenders outside the box.

“Sometimes you pick up a ball on the edge of the box and people think it’s easy, but you have to be focussed and make the right decisions to be able to do that. It doesn’t look as impressive as saves but it pleases me much more.

“When you stop improving you stop being a good player. You always have things to work on and you can always be better and that’s my target after every single training session.”

Speroni still likes to put himself in the middle of the action but a coming together with Craig Dawson at West Bromwich Albion last month led to the goalie being briefly knocked out during the melee of the Baggies’ first goal. That saw the new Premier League regulations around concussions come into force, and despite his protestations Speroni was substituted.

Clearly aggrieved at the time he now believes that common sense prevailed, a stance which is becoming thankfully more common as the research into sporting had injuries begins to highlight real dangers later in life to punch-drunk players who remain on the field after severe head traumas.

“I think the physios and the manager did really well because obviously as a player you never want to come off the pitch and carry on playing but in those circumstances you need someone with a cool head to make the decision for you. It’s hard to leave the pitch but life is more important.

“Normally when you get a knock like that it’s all you can feel for the next two or three minutes but after that I was feeling fine. I had a little pain in the back of my head and I wanted to carry on but I think in the end the right decision was made.”

Also this season saw him reunited with Neil Warnock, someone he has a lot of admiration for – “I had three fantastic seasons under him and won the Player of the Year every time thanks to the confidence he gave me” – but having worked under eight different permanent managers since arriving at Palace surely he would be well-equipped for a spot in a dugout in the future? Speroni isn’t quite so sure.

“I think it’s too early for me to say, I’m still concentrating on being a player rather than thinking about management,” he said. “I think I’d like to coach, sometimes when I get the opportunity to coach the young goalkeepers I really enjoy that.

“Ollie [Pain], Greggers [David Gregory], and young Chris [Kettings] are working really hard and I like to put sessions on for them when George Wood is not here because when I was a kid and I had the opportunity to work with great players and coaches it helped, and if I can pass some of my experience onto them that would be brilliant.

“Hopefully though I have many more years as a player to come. I’ve said before I would love to retire here but it’s not in my hands, so we’ll see what happens.”