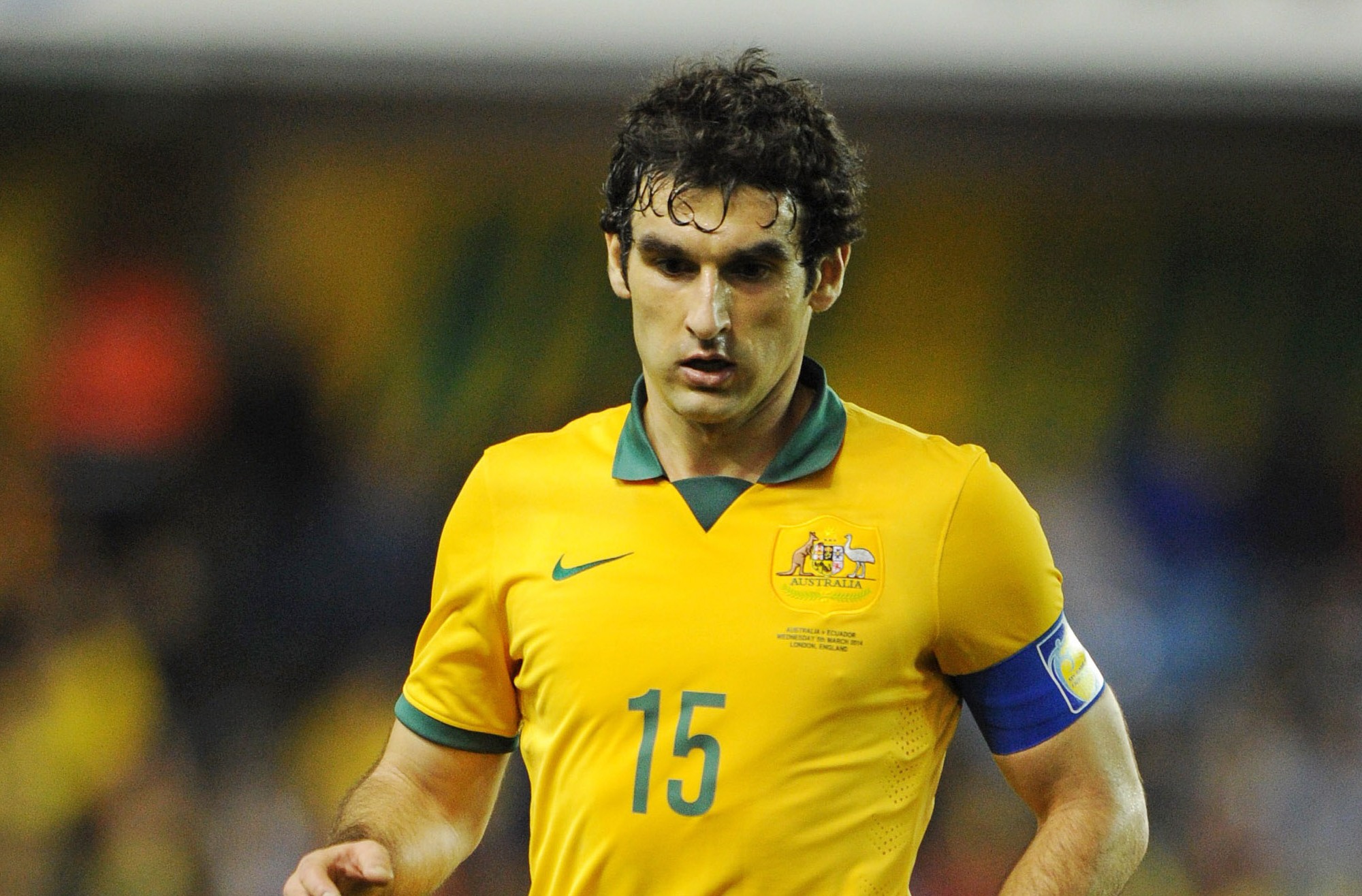 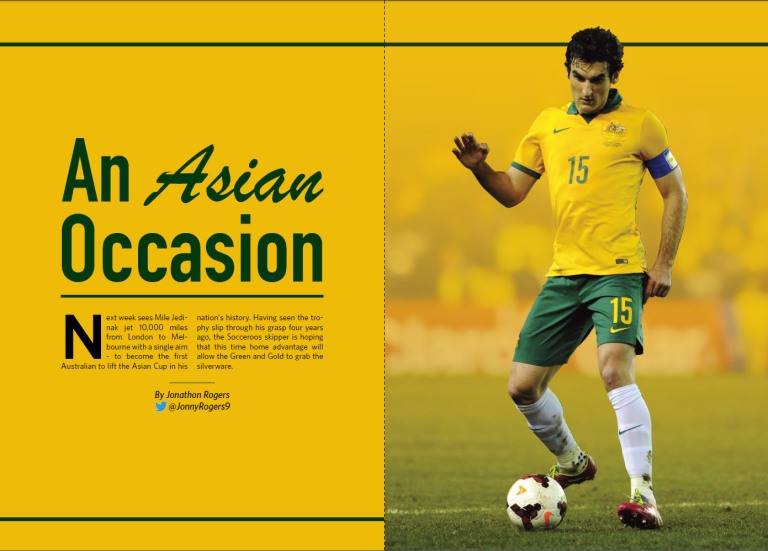 Next week sees Mile Jedinak jet 10,000 miles from London to Melbourne with a single aim – to become the first Australian to lift the Asian Cup in his nation’s history. Having seen the trophy slip through his grasp four years ago, the Socceroos skipper is hoping that this time home advantage will allow the Green and Gold to grab the silverware.

Having become such a huge part of Crystal Palace and the Premier League, it’s funny to think that four years ago Mile Jedinak was relatively unknown outside of his native Australia.

The then-Gençlerbirliği midfielder was just beginning to establish himself in the national side, and a call-up to the Socceroos squad for the 2011 Asian Cup would provide him the platform he needed to make a name for himself.

Featuring in all of Australia’s games during the tournament in Qatar, he scored crucial goals – his first international strikes – against South Korea and Bahrain to help drive his side into the final, where they endured extra-time heartbreak as they lost out to Japan. However Jedinak’s talents had been showcased the big stage, and unsurprisingly six months later he earned his move into the big time with Palace.

It is a very different Jedinak that returns to his homeland for the 2015 edition. Now captain for both club and country, his game has developed year on year in England and he was recently awarded with the Asian International Player of the Year award – theoretically classing him as currently the best player from the entire continent plying his trade abroad.

Few fans from Selhurst to Sydney and Croydon to Canberra would argue with that, but Jedinak knows a place in the pantheon of Socceroos history beckons should he get his hands on the trophy at Stadium Australia on 31st January and lead his side to their first Asian Cup triumph during their 92-year history. Understandably, he can’t wait to for it all to kick off.

“I’m really looking forward to the competition because it’ll be good to head back home and play in front of a lot of my friends and family which I don’t get a chance to do often,” he said. “I think with the national team of late we’ve been away for a significant period of time and haven’t played too many games at home so it’ll be great to get that home buzz back. It’s something that you need to enjoy because there will be a lot of pressure and expectation which you need to handle in the right way and I think we will.

“I think there’s a good vibe about Australian football at the moment, everyone is getting behind the tournament and looking forward to it. Apparently our opening game in Melbourne is a sell-out which is encouraging and it’ll be great to have that home support – we’re looking forward to embracing it and using it to our advantage.”

Football in Australia has changed completely since their breakaway from the Oceania Football Confederation to join their Asian counterparts in 2006. Instead of enduring meaningless lop-sided victories against minnow such as American Samoa, who they famously beat 31-0 in 2001, the new generation of players that Jedinak was ultimately to be a part of would face much tougher tests, and improve from their exposure to a higher quality of opponents.

Their first experience of the Asian Cup in 2007 saw them reach the quarter-finals, but a Jedinak-inspired Socceroos side went all the way to the final four years later before the side from the Land Of The Rising Sun snatched a winner in the 109th minute to deny them glory. It is evident that defeat still wrangles with the Eagles midfielder and you sense his determination to right that wrong and lead a new side to success.

“Losing in the final last time obviously gives me added motivation this time. I think the fact that it’s in our own back yard will give you a little more motivation as well, but there’s not a lot of members of that squad left. It’s hard to compare the two sides because you’re playing with different players who are playing in different parts of the world, but I think that both teams had their own strengths and weaknesses.

“There’s probably a little more experience in the Palace dressing room than the Australian. Some of the boys in the national squad don’t have a lot of caps but are playing at a good level. When I’m with Australia it does feel like home and all the boys get along and understand each other.

“We know we don’t spend much time during the year in camp together so we have to make that time count. Every training session is an opportunity for players to get into the national team, so you have that mindset. That’s the one big difference but I try to have that mentality all the time as it helps you in the long run.”

If you look at Australia’s recent results you may wonder why they’ll come under increased pressure to win the tournament in front of an expectant crowd. Just one win has been garnered from 11 competitive outings in 2014, which has seen the side slip to 102nd in the FIFA world rankings, their lowest ever position.

However too much shouldn’t be written into the results. Coach Ange Postecoglou was only appointed in October 2013 and spent the first six month tinkering with his squad in preparation for the 2014 World Cup. Three defeats were suffered in a tough group containing holders Spain, semifinalists Netherlands and an exciting Chile side, but the performances were encouraging and after another six months of blooding new players and fiddling with formations, Jedinak is satisfied with the group he’ll lead.

“I think going into the tournament we’re looking good, we need to still work on things but we’ve progressed in the last year from when the new manager took over and there’s been a lot of encouraging signs in our play. Now we’re in tournament mode again so you’ve got to combine all that and try not to slip up; in friendlies when you make a mistake you get away with it as you’re not playing for actual points but I’d like to see us keep what we’ve shown so far.

“It’s helped 100% that this tournament has come so close to the World Cup because we were in the camp during the summer for an extended period of around six weeks, and you spend a lot of time with teammates and the staff so you got to know people better. Sometimes that can get a little bit testing for some but you want to see the emotional side of the boys and help them with that. The experience from the World Cup is only going to make us stronger because it won’t be out of the ordinary for us now.”

Many Palace fans will be keeping an eye on the Aussies to see how they progress, perhaps not knowing too much about the men wearing the green and gold of the host nation. Amongst household names such as Tim Cahill and Mark Bresciano are a smattering of Premier League players, with the rest of the squad earning a living across four of the five continents, many of who will be aiming to make a similar impact to then- Turkish-based Jedinak’s four years ago.

“I don’t think many fans would know a lot about our squad but I’d like you’ll keep tabs on them if you watch our games,” he said. “James Troisi plays in Belgium at the moment and he’s been doing well, he’s had a couple of solid games for us recently, and Robbie Kruse is starting to regain his fitness after a lengthy spell out so he’ll be one to watch.

“Massimo Luongo, who plays over here for Swindon Town, has been involved and is getting comfortable with the surroundings which is what you want, so there will hopefully be a lot of positive stuff from our side of things.”

Jedinak’s boys will kick-off their campaign on 9th January in the tournament’s opening game against Kuwait, and then take on Oman four days later. They then face a potentially crunch game against South Korea, who were also a part of the World Cup party and one of the main threats for the crown next month, with Jedinak also earmarking some other big names from the continent as contenders.

“We’ve played South Korea a number of times and it’s always tough, they’re a real force within Asia,” he added. “They’re going through a transitional period at the moment after the World Cup and have a new manager, so they’ll be slightly different. We’ve also had some difficult games against Oman and some also not-so-difficult games, so they’re a team you can’t take lightly and we’ve played Kuwait a couple of times a few years ago in qualifying and that’ll be tricky.

“There’s no teams that have made this tournament that are going to be easy opponents so you can’t underestimate anyone, and we know we’ll have to be right at it early on to have any chance.

“We played Japan a few weeks ago and lost 2-1 so they’ll be force as they’ve got a lot of experience. Then there’s Iran who had a good showing at the World Cup so will be difficult, and Qatar and the United Arab Emirates gave us some good games not so long ago. You play every three or four days which will be testing so you’ll need your whole squad, and looking around I’d like to think that we’ll be right up there.

“I don’t want to get ahead of myself but it would mean an awful lot to win; I’d rank it right up there as one of my career highlights. Day by day, game by game we’ll just see how we can and if we get there we’ll talk about it then!”