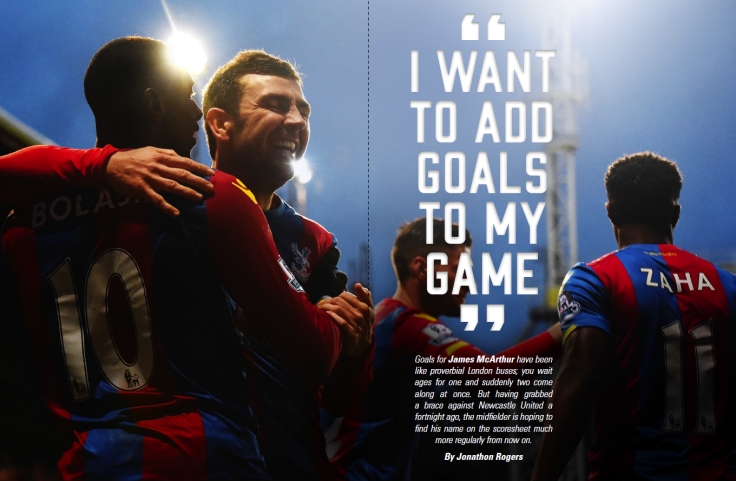 Goals for James McArthur have been like proverbial London buses; you wait ages for one and suddenly two come along at once. But having grabbed a brace against Newcastle United a fortnight ago, the midfielder is hoping to find his name on the scoresheet much more regularly from now on.

When James McArthur watched his right-footed drive flick off the back of Newcastle’s Paul Dummett and career into the opposite side of the Whitehorse goal that he had in mind, you could sense that he was praying that his initial blast was on target.

Having not netted for Palace since March and only scoring once for the club before that, it would have taken a brave member of the Dubious Goals Panel to deny him another. But thankfully replays showed that McArthur’s strike was goalbound and there would be no need for the mysterious body to get involved.

But after waiting nine months for that moment of personal triumph, an hour and a half later he was soon celebrating doubling his Palace tally in one day in the final seconds of the game to clinch a two-goal haul for the first time since he was a 13-year-old playing for Rangers South Boys Club, a million miles away from the bright lights of the Premier League. 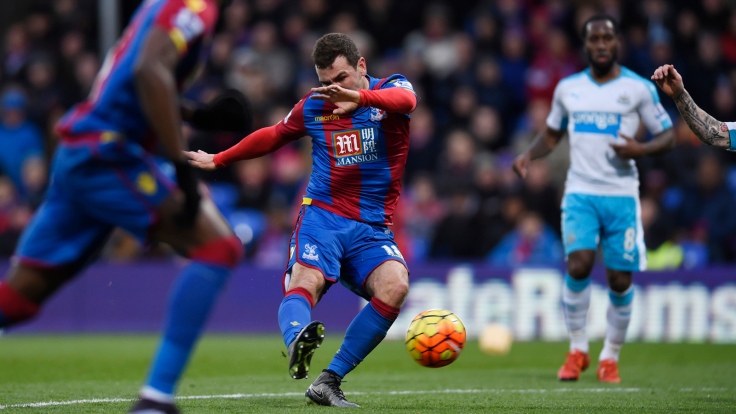 On getting a brace, he chuckled: “I’ve threatened to do it a couple of times in my career as I’ve scored quite early in games and had chances. To get a brace is great on a personal level, especially with my second coming 10 seconds before the end of the match so that was special too. It was a great moment for myself and hopefully I can keep doing it.

“I want to add goals to my game this season, not just for a personal thing but to help the team out. You take them any way possible to get your name on the scoresheet. If it goes in and it’s an own goal it doesn’t matter, as long as the ball goes in the net and we win that’s the main thing.

“It’s going to give myself confidence because when you’re scoring goals it gives you belief but it’s all about the team. The goals can come from anywhere – you look at Scott Dann who’s got three, Damo has a couple and so have I, so they’re coming from unexpected places and we need to do that to pick up points.”

That’s exactly what Alan Pardew’s troops have been doing of late, as they bounced back in emphatic style against the Magpies to help ease the pain of the home defeat to Sunderland six days earlier. Add in another good result on Merseyside on Monday night and the Eagles are beginning to get on a roll at the perfect time with a flurry of festive fixtures beginning next week.

That ensures that Christmas is always a testing time for footballers and any Yuletide fun has to be planned well in advance, but the players picked the perfect day for their annual evening out as they basked in the glory of the club’s record Premier League win in fancy dress a few hours after the demolition of Newcastle, as they were allowed a brief moment to let their hair down.

“It was important that we bounced back from the Sunderland defeat and the performance merited that big scoreline,” McArthur added. “I think we were threatening to do that to someone for a while, and we were very dominant. There have been some very good performances since I’ve been here such as Manchester City, the manager’s first game against Tottenham and West Brom this year but it’s definitely up there.

“It definitely made the night out after more enjoyable! You don’t want to be going out after a loss and it was nice to celebrate the way we did. You work hard all through the year and it’s good to have a bit of time to blow off some steam, but we’ve come back, worked very hard and got a good point on Monday night to make that night seem even better now.

“I think it was one of the best points we’ll get all year. The manager spoke about how high flying they were playing very good football and it was really tough on the night. They hit the bar and post and Wayne made some very good saves so in that context a point is a great result.

“You create that luck with how hard you work and how much you put in for each other. We could have had a couple more goals on the counter-attack as the last 15 minutes were so open, so it was very good for fans to watch but being involved in it was tough!”

Not shying away from hard work is one of many of McArthur’s many qualities. He’s a player you can virtually guarantee will keep going right until the final whistle is blown – which was evident in the latter stages against Newcastle despite limping heavily and the result in the bag. His perseverance resulted in him grabbing another goal with a lung-busting burst into the area.

These kinds of displays have been one of the main factors for the club’s success so far this season, with many fans suggesting that he’s on course to be named the club’s Player of the Year come May.

The Scottish international isn’t flashy, but he’s classy. He neatly wins the ball back through tackles and interceptions and lays it off to those players who get the Selhurst masses off their feet, allowing Zaha, Bolasie and co to be highlighted on Match of the Day while he quietly and efficiently goes about his business.

Playing alongside Yohan Cabaye though has seen him reach new levels of appreciation from the Palace fans, and he believes the French international has been a huge factor in helping him hit peak form this campaign.

He said: “I think I went through a wee spell where I hadn’t played as well as I’d liked for a couple of games but I feel my form has come back and I’m enjoying playing at the moment, especially in a team that has plenty of momentum.

“Yohan is very good. You pick up different things from different players and he’s one you try and watch and pick things up from. You can give him the ball in tight situations and he’s brilliant at using it. He’s played at such a high level and you can tell because he’s such a top player.

“I don’t mind being unnoticed as long as I’m doing a good job for the team and helping them win matches. You obviously want the fans on your side and they’re unbelievable here. The biggest thing about them is that when you’re losing games and things aren’t going your way then they stay with you because they keep believing and become the 12th man that we need. The main credit I’ll get is to keep playing games and staying in that side as when you look at the competition we’ve got, if you’re playing then you’re doing something right.”

In addition to the Eagles supporters’ plaudits, his qualities have also been appreciated by Alan Pardew who has made him a regular this season ahead of established international stars such as Mile Jedinak and Joe Ledley. 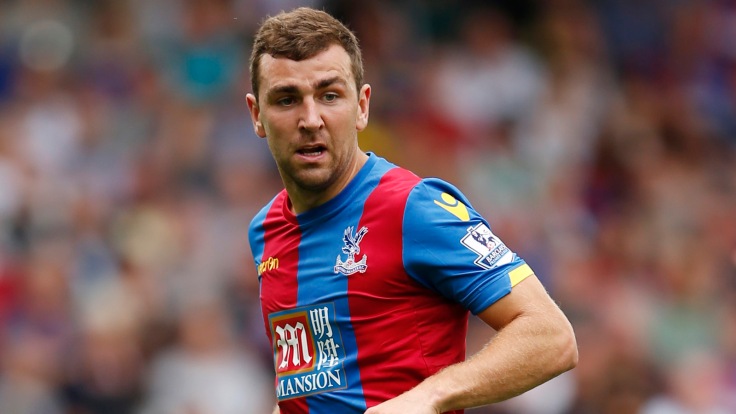 With such fierce competition throughout the squad, the one thing that shines out when you see them at close quarters in the team spirit. Whether they’re selected or not, they’re supporting their rivals who have their spot in the line-up to help them achieve their maximum and win football matches. It’s a unique camaraderie, and one that the 28-year-old is delighted to be a part of.

“We’ve got a really strong squad and it keeps everyone on their toes,” he added. “You have to keep playing well if you want to stay in the 11 on a Saturday as when you look at the players on the bench or even those that don’t make the matchday squad it shows how far we’ve come and how good squad we’ve got.

“This squad is the best squad I’ve been in, not only for competition for places but the togetherness. It’s a real tight-knit team and we’ve got a goal of doing well this year and everyone knows it’s a team game.”

The professionalism of McArthur and the rest of the Eagles squad is evident on and off the pitch, and has culminated in driving the club into the Premier League’s top six. But no-one is getting carried away or believing the hype, and the former Hamilton Academical and Wigan Athletic man is especially pragmatic about his side’s aims during the next month or so.

“I think we need to keep playing good football and winning matches and wherever that takes you it takes you,” he said. “I don’t think that at this point in the season you can get too carried away; if you win a couple of games on the trot you move up a few places and if you don’t get a result you can start slipping down the table. We just need to keep taking things a step at a time.

“This league is so unpredictable. You look back at the Sunderland game and everyone expects you to win and you don’t, and we lost against Leicester and West Ham and then come up against Liverpool and Manchester United and take four points. We believe we can win any game and we go into every one aiming to take maximum points.”