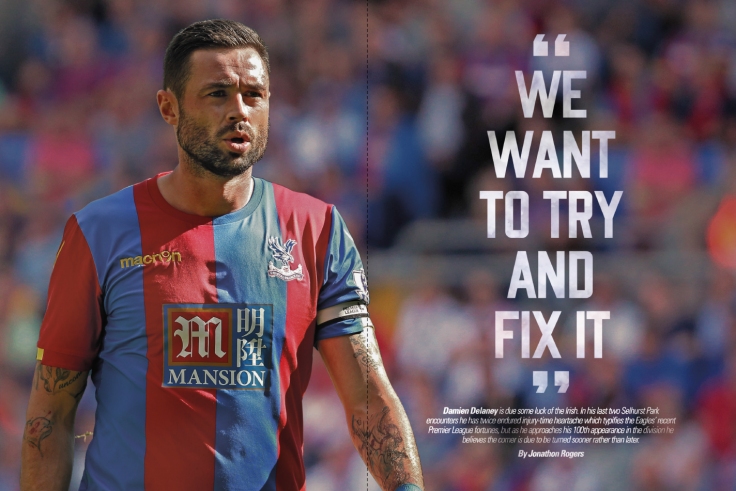 Damien Delaney is due some luck of the Irish. In his last two Selhurst Park encounters he has twice endured injury-time heartache which typifies the Eagles’ recent Premier League fortunes, but as he approaches his 100th appearance in the division he believes the corner is due to be turned sooner rather than later.

When Damien Delaney controlled the ball on his chest and swung his left boot at it, time seemed to stand still. 92 minutes had ticked by and trailing to Leicester City, Palace were desperate to score. The centre-back had looked to have netted a goal of the season contender, a precious equaliser and a vital confidence-booster all in one.

However it wasn’t to be. The ball kissed the top of the crossbar rather than dropping under it and a sixth straight home loss was etched into the record books. Having seen Liverpool’s Christian Benteke crumple under minimal contact in front of him a fortnight earlier in the 94th minute, the Irishman has been questioning when his luck will change.

His goal against West Ham United last weekend could be a turning point, but the most straight-talking member of the Palace squad admits that his side’s recent travails are not purely down to misfortune, although it has been more prevalent in recent matches. The performances have been there, but the points haven’t, and that gives Delaney cause for optimism that the tide is about to turn, and not a moment too soon. 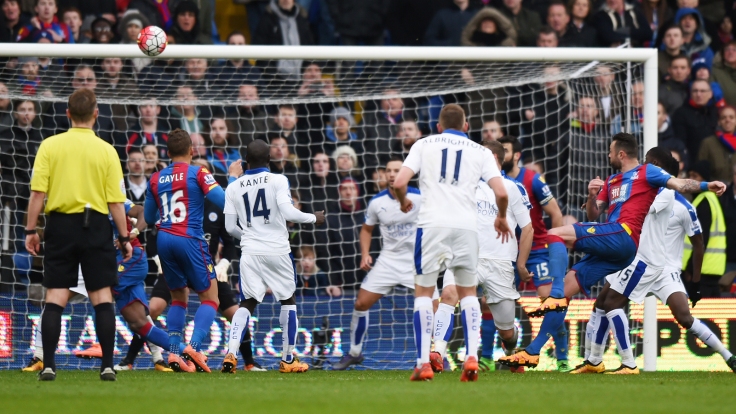 “I know a lot of us are blaming our luck but when you go 13 or 14 games without a win it’s a bit more than that,” he said bullishly. “We have an idea of what we think is wrong and we want to try and fix it. If you lose you’ve just got to put it behind you and focus on the next one. You have to trust that the team and the management will get it right eventually, but we’re definitely overdue some luck. I was gutted not to score that late chance against Leicester. I thought it was in but it just clipped the bar and went over. I just thought to myself: ‘that sums things up at the moment; nothing seems to be dropping for us’.

“However when we were floating in mid-table, maybe we got a little bit complacent. When you look at some of the games we played just after Christmas, such as the Aston Villa one and Bournemouth at home, I think it crept in but we got rid of that and seemed to be getting back on track in the last few weeks.

“I’ve suffered long losing spells before but if I’m honest we deserved it back then. When I was at Ipswich I think we went on a run of about 16 games without a win. We weren’t the best team, but even that turned around. We got lucky and won 1-0 against Derby County at home and that’s what we need now – one win to get us up and running again. Some of our defeats have been tough to take as the performances and the way we’ve been playing have been good.” 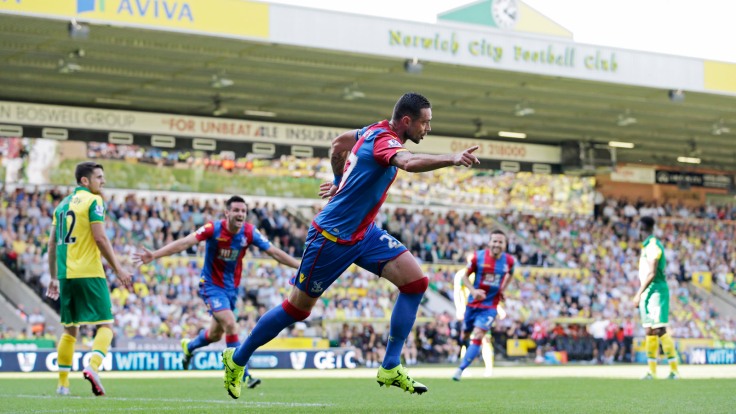 One of the Eagles’ more impressive displays of the campaign came way back on its opening day at Carrow Road, a game where the 34-year-old found himself as skipper and again on the scoresheet as Alan Pardew’s men ran out 3-1 victors against today’s opponents on a warm summer’s afternoon in Norfolk.

That was the first of nine wins racked up before Christmas but 2016 hasn’t been so kind to both of today’s teams, with Norwich claiming just three league wins themselves since the calendars needed changing. It means the circumstances surrounding this game are in stark contrast to that balmy day in East Anglia last August.

Looking back, Delaney said: “It seems a long time ago now – a lot has happened since then. Mine was an important goal to get us two ahead, and obviously they got one back so it proved crucial. It was a fantastic day and a good way to start the season and it’s just a shame we couldn’t keep it going.

“I can’t really complain too much about my own form, it’s been a bit up and down but it’s been like that for a lot of players. There have been good patches and some not so good, and it’s been tough recently but we’ll just have to keep it going and see where it takes us.

“Captaining the team at the start of the season was also enjoyable,” he continued. “I know Mile had some issues with injuries and things like that so I was more than happy to take some responsibility. It’s something I might look back on in a few years and think was awesome.”

When the time comes to look back through the scrapbooks, there will be plenty for Delaney to reminisce about. He’s won promotion from all three tiers of the Football League during his years with Hull City and Palace and has been capped nine times for the Republic of Ireland. 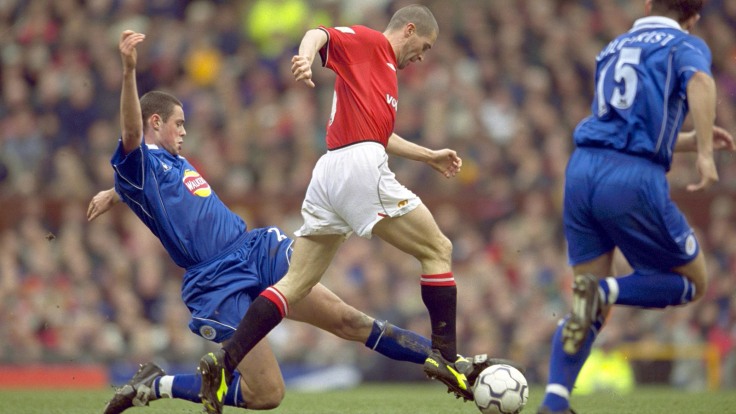 Today sees him participate in a Premier League game for the 100th time – incredibly over 15 years since his first outing. That couldn’t have been more of a baptism of fire for the teenager, freshly signed from Cork City by Peter Taylor, who lined up for Leicester City against a Manchester United side marching unopposed towards a third successive championship. Debuts don’t get much tougher.

Casting his mind back to that day, Delaney said: “It was a long time ago now! It was at Old Trafford and we lost 2-0. It was the United team that had won the treble including Teddy Sheringham, Ole Gunnar Solskjaer, Paul Scholes, Roy Keane and Nicky Butt, so it was pretty awesome as a 19-year-old kid to play against them. It wasn’t the most ideal place to be blooded but I enjoyed it.

“The league is phenomenally different since those days, even in the last three years you can see the difference since we came up. It’s continuously changing and as a player you have to keep evolving or you’ll get left behind. That Leicester team had some foreigners but not the wide range of South American or Asian players that are coming in now.

“Tactically the Premier League has grown hugely and the pace of games is a lot quicker which I think is down to the balls and the surfaces we play on now. Back in the day they weren’t great but now they’re slick and heavily watered and they design the balls to zip across it. There’s also a better level of technical players too, so they’re a few changes I’ve noticed.”

As one of the most senior pros in the Palace squad with a decade and a half of experience consisting of nearly 600 matches under his belt, Delaney’s voice is always heard but not just when providing advice as a stand-in captain or barking orders at his teammates on the pitch. He is usually right in the thick of any banter flying around the changing room, be it about clothes, music or anything else that brings laughter into proceedings.

Being a part of an energetic crop of players was something he had to learn very quickly during his time at the Foxes, who back around the turn of the millennium boasted a talented squad that won two League Cups in three years and will go down in the club’s history, possibly alongside this year’s Premier League champions.

“It was a great team I came into – Matt Elliott, Gerry Taggart, Frank Sinclair, Muzzy Izzet, Robbie Savage, Neil Lennon; they were good old-fashioned pros and I cut my teeth training with those every day,” Delaney reminisces. “They might have been a bit of a rag-tag bunch and a bit crazy but they knew how to train and play and when games started they were always at it. 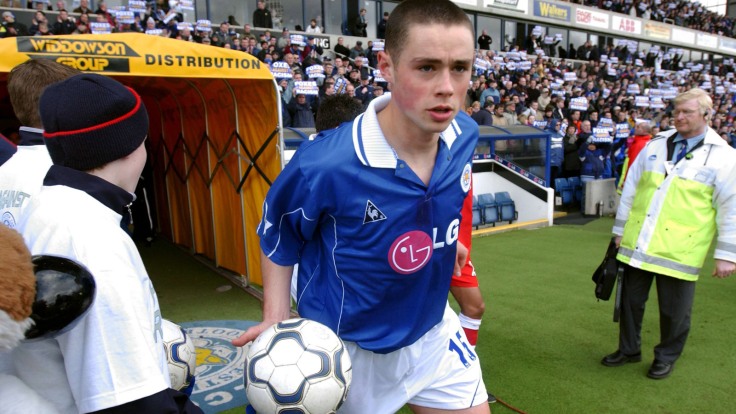 “You’ll never get another environment like it and it was great as a young kid to come into. There were characters like Andy Impey and Tim Flowers which you’ll probably never get again, so for a teenager to come into that was an interesting learning curve for me. I enjoyed it and wouldn’t change anything.

“I spent two years there in the early stage of my career so I know what a good club it is and some of the staff are still working there from my days. I’d love to see them go on and win the league this year; I think it would be good for sport in general if they did.”

Palace have their own shot at silverware this season with the FA Cup semi-final against Watford looming a fortnight away. Having played in the 2013 Wembley encounter against the Hornets that brought Premier League football back to SE25, Delaney is well-placed to suggest if that win three years ago would make any difference whatsoever, but it’s a notion that he emphatically rejects.

“That counts for nothing unfortunately, I won’t be calling upon my memories, I’ll just be focusing on the task in hand,” he said in blunt fashion. “The play-off final will have no bearing on this game, it’s a fresh game of football in a big arena but we’re used to that now after going to the Emirates and Old Trafford regularly. It’s not like you’re a League Two team going to Wembley.”

A typically no-nonsense response from the no-nonsense defender, who will be hoping his, and the Eagles’, luck has changed come then – fingers crossed.