Bought to score goals last summer, Connor Wickham stepped up when Palace needed it most to send the Eagles to the FA Cup final. Now they’re there, he’s ready to repeat the feat to possibly clinch the first major piece of silverware in the club’s 110 year history, and make dreams come true.

As the ball rippled the back of the net, 30,000 fans in yellow and black went ballistic. Their talisman and terrace darling Troy Deeney had headed them level in the FA Cup semi-final at Wembley and he was sprinting in front of them soaking up the adulation. It was one of many moments from that afternoon which will live with Connor Wickham forever.

At that moment he was riddled with guilt. 20 yards from Watford’s goal, a misplaced pass by the striker allowed the opposition to enter Palace territory, win a free-kick, see it deflected wide and then score from the subsequent corner. Not many fans, or even his teammates or manager, would have pinned the blame on the man wearing the number 21, but he did – and he was adamant he had to make up for it.

Barely six minutes later he was the one heading the ball into the goal, running towards 30,000 screaming fans and drinking in the acclaim. A desire for personal redemption had pushed his team towards only the second FA Cup final in the club’s history and forge another memory he’ll treasure forever.

On that day at Wembley nearly two weeks ago, Wickham revealed: “It’s definitely one of the highlights of my career, it was not just a massive game or occasion but it was also a massive goal on a personal note.

“Their goal was my fault – people are saying it wasn’t but I’m taking the blame for it because I lost the ball which allowed them to get up the other end of the pitch. As I was walking back to the centre circle I was saying to myself that I had to score and thankfully the chance came. It was such a relief when the ball went into the back of the net and we’d got back in front because I didn’t want all the hard work to go to waste.

“After I scored, my first thought was that the pitch was really dry so I wasn’t going to slide very far during my celebration! But it was a fantastic moment; all my family and friends were there so it was a day I’ll never forget.”

That’s a sentiment that all those clad in red in blue packed into their half of the national stadium will resonate with, and after seeing the final half an hour out, plus some nerve-shredding stoppage-time, players, owners and fans could bask in the glory of Palace’s first appearance in the FA Cup final for 26 years.

Describing his abiding emotion when the final whistle eventually blew, the striker chose: “Relief. The referee added on five minutes which makes you a little bit nervous but from the moment we scored the second goal we looked like we weren’t going to concede and see the game through, which is what we’ve needed to do all season but we managed to do it in the semi-final.

“We had a couple of days off after the game and the gaffer told us to enjoy it, and the owners were in the changing room afterwards and they gave us their congratulations. It’s great for Palace to be in another final and get our name back on the map.

“The support we had was crazy; I think there were more Palace fans in Wembley than can fit into Selhurst so it just shows the backing that the club has and what it means to support Palace, and it’s fantastic to have. However I now have to be like it was just another game and another goal and get myself mentally prepared for the next one. We haven’t won a trophy yet and it’s something we have to make sure we try and do by the end of May.”

Aiming to deny Wickham that is the small matter of Palace’s cup nemesis. Having beaten the Eagles in the 1990 final and also knocking them out at the semi-final stage five years later, both after replays, Manchester United once again stand in the way. 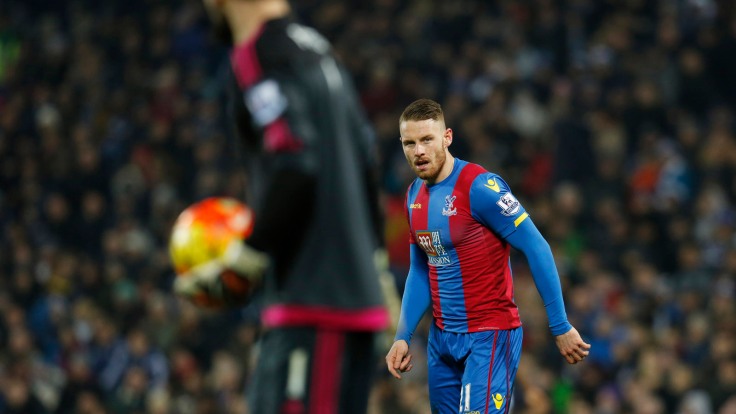 However history will be an afterthought to someone who was barely two-years-old when that last-four clash at Villa Park took place in 1995, but would soon become a child fantasising of getting his hands on the most famous trophy in world club football. Now he is this close, he is determined to seize his chance.

“We played them not so long ago but the cup final will be a completely different match to Old Trafford. We’d take a win however it comes – if we score in the first minute or the 92nd minute, it doesn’t matter as long as we win the game. We shouldn’t play the occasion, we need to play the match and the rest will just sort itself out.

“However the manager has still got us focusing on the league and we’ll look at the cup final in the six days after the Southampton game. As long as we keep everybody fit so that we have a full strength squad then I think we’ll put ourselves in good stead. The team compliments itself when we’re playing at 100% and I think we were doing that right up until the new year and then we got hit by a few injuries and it rocked us, but thankfully teams haven’t taken advantage of our slip in form.”

Typifying the mood around the whole club, Wickham admits that guiding Palace to their first ever piece of major silverware would be a great way to gloss over a frustrating second half of the season with an enormous high. After signing from Sunderland for a hefty transfer fee last summer, the 23-year-old received an early setback when he suffered a calf injury only three games into his career at his new home, which then reoccurred later in the campaign.

Having struggled for form and fitness, and with just a solitary penalty against Stoke City to his name by February, the hitman has begun to show exactly what he can do since by scoring five times in 10 appearances, exciting his new-found fans about what he could
be capable of when firing on all cylinders – something he is already working hard on to make a reality.

Speaking about his debut campaign, Wickham said: “I’ve enjoyed it a lot. I haven’t played as much football as I would have liked due to injuries and setbacks but we’ve got to a cup final and that’s an achievement in itself, but if we won a trophy that would turn the season into a massive one for us.

“I came with expectation on me and getting injured in the first few weeks wasn’t ideal, so I don’t think I’ve shown my full potential. Over the summer I’m going to focus on getting fully fit and strong in all the right areas to play 38 or 40 games a season, maybe more. I’m going to start that work now to try and help me see more games.

“I’m going to take the first couple of weeks off and then get into training a bit earlier and get myself ready. Over the last few summers I’ve not really partied that much, I’m not really into that, so I’ll go off with my family and my girlfriend and then come back ready to play as many games as possible, and touch wood I won’t get injured.”

Everyone associated with the club will be hoping that’s the case having now seen glimpses of what he’s capable of – netting all types of goals from cup-final clinching headers, spot-kicks, opportunistic efforts and thunderous finishes. This has seen him nominated twice for the Goal of the Season award at the club’s Awards Night next week – but ironically the one he deems the best hasn’t made the cut!

“My favourite ones would have to be the first against Sunderland or the second against West Brom,” he suggested. “I think the West Brom one was lucky to go into the top corner so it looked spectacular but the one against Sunderland was maybe more about control and accuracy as I had to put it in the far corner and that’s what happened. To be nominated for two of the goals is great because it gives me more chance of winning!”

However his other goal on the ballot has given the Eagles a fantastic chance of winning something much more prestigious. If Wickham was that strong-minded to get a goal in a semi-final, just imagine how determined he’s going to be when he walks out at Wembley once again in the showpiece final on 21st May.