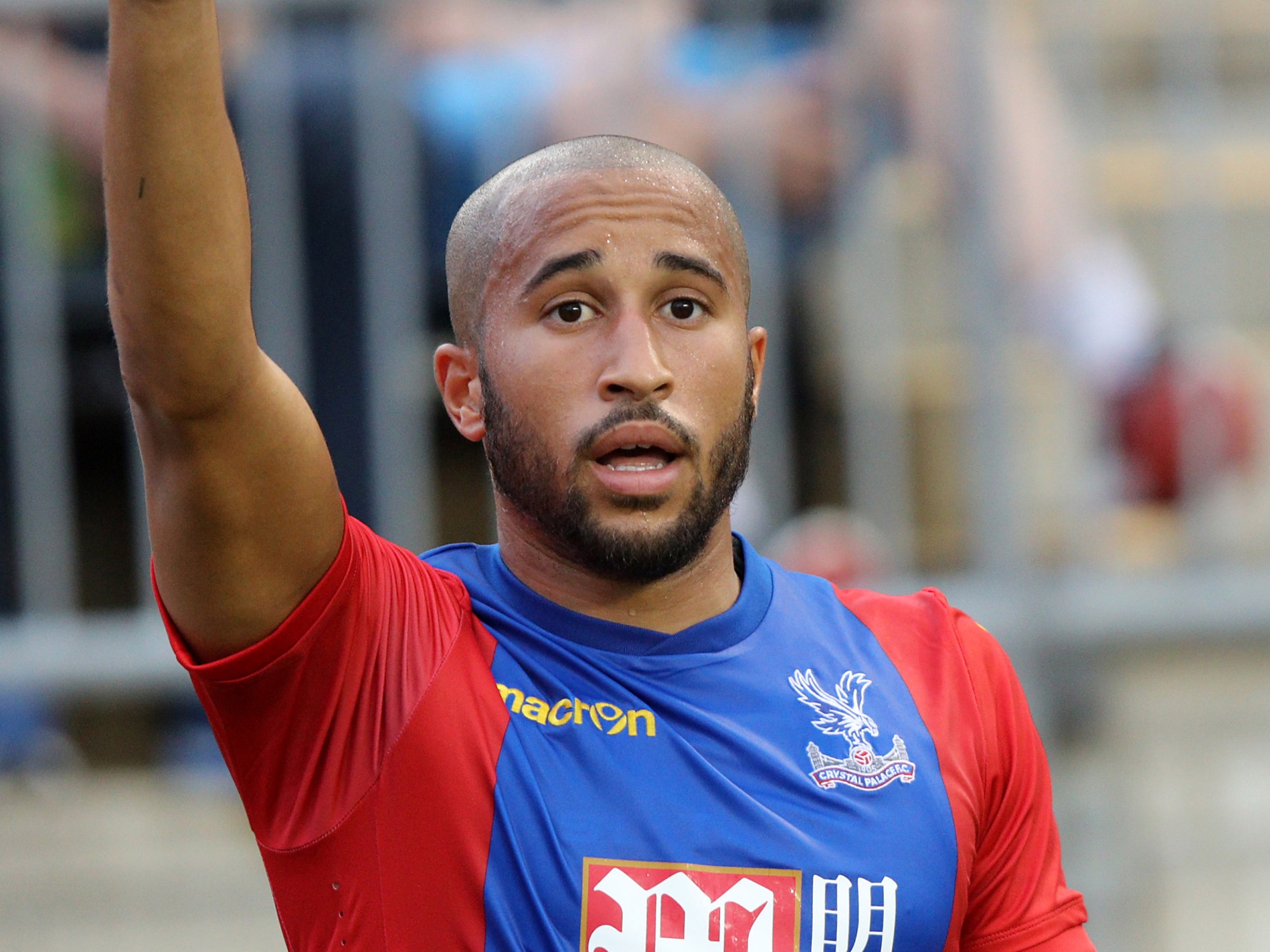 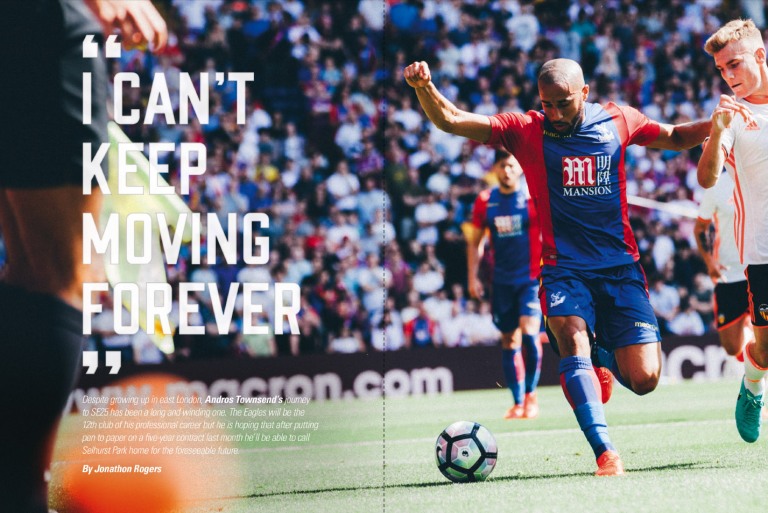 Despite growing up in east London, Andros Townsend’s journey to SE25 has been a long and winding one. The Eagles will be the 12th club of his professional career but he is hoping that after putting pen to paper on a five-year contract last month he’ll be able to call Selhurst Park home for the foreseeable future.

Andros Townsend knows all about trying to make a good first impression. Today’s game against West Bromwich Albion will be the 12th time he has stepped out onto a fresh stage surrounded by new faces clad in unusual colours, and the eyes of an expectant home crowd honed in on him, waiting to see what he is capable of.

But the England international has become familiar with the unfamiliar. Time and time again he has found himself in these kinds of situations and thrived – most notably netting on his Tottenham Hotspur debut, and on his first full appearance for his country he was named man of the match in a scoring effort against Montenegro back in 2013.

A year earlier he was being highlighted as a damning indictment of the failings of the loan system, but now the 25-year-old is being lauded as its most successful manipulator. The process of getting to know teammates, a club’s style of play and making his debut is now second nature to the jet-heeled winger, emphasised by his energetic displays during pre-season for the latest club to be beneficiaries of his talent. 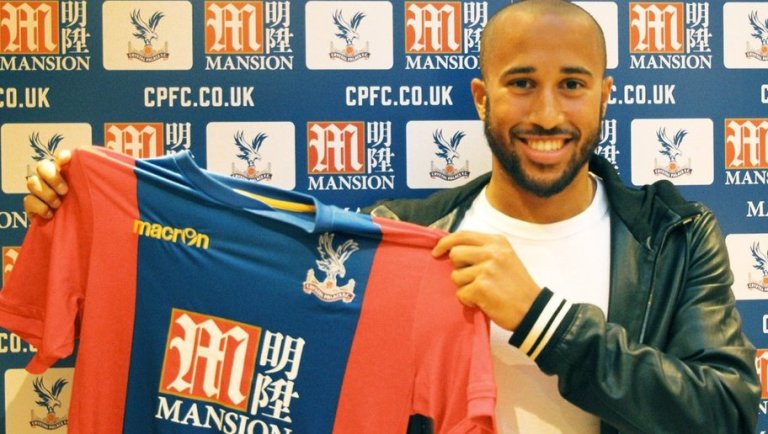 The Eagles swooped quickly to get a contract under his nose six weeks ago by triggering his £13 million release clause following Newcastle United’s relegation, which had put many other top-flight clubs on alert as they considered becoming club number 12 of Townsend’s seven-year career, but a return to the capital and Premier League football helped Palace persuade a man who already feels settled and prepared to finally bed down some roots.

“The more loans you go on the more used to moving around and settling in you get,” he said. “It means that six or seven years later it’s become a routine. I’ve come here and met new faces and I’m not fazed by it so it’s prepared me well. I’ve always tried to settle quickly to get my full focus on football and it’s been the same here.

“Every time I’ve played against Palace or seen them on TV they’ve always been an attacking club with great wingers that look to make stuff happen. Since I joined I’ve had a lot of the ball when I’ve played and got involved in a lot of the action and I think it’s down to the front four to take the team to where they want to be.

“I can’t keep moving forever, I’m 25 now and I’m at a good club with ambitions to build on what they started last season. If I’m performing to the ability that I can reach and if Palace do the same then I don’t see why I can’t be here for many years to come.” 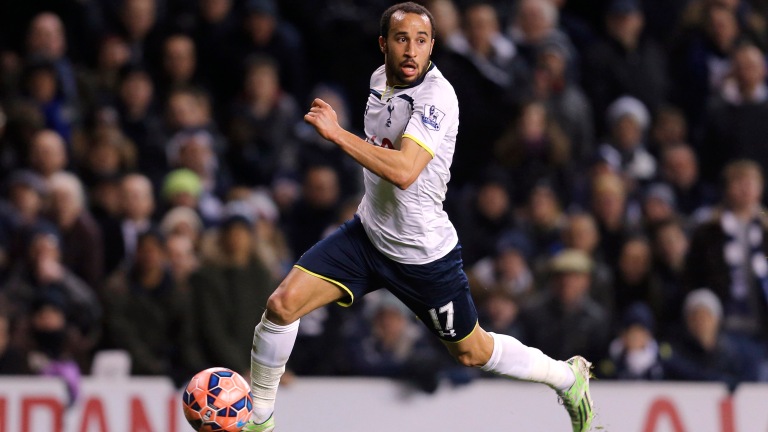 Townsend’s potential or ability has never been in question, shown by the number of clubs clamouring for his signature on loan deals to help with promotion pushes or relegation scraps every time he was made available by Tottenham.

However the decision to continually up sticks in a search for first-team opportunities was all his. Sitting in Spurs’ reserves he was tantalisingly close to achieving a boyhood dream of rampaging down the same stretches of north London turf that Ossie Ardiles, Chris Waddle, David Ginola and Gareth Bale had once occupied, but instead of waiting for a chance Townsend fast-tracked his progress by embarking on a tour of English football that most groundhoppers would be impressed by.

He pitched up with a pair of boots at Yeovil Town, Leyton Orient, Milton Keynes Dons and Ipswich Town before making his Spurs bow in an FA Cup tie in 2011, and then spent time at Millwall, Watford, Leeds United and Birmingham City before he was handed a Premier League debut.

Rather than resting on his laurels, Townsend seized the chance to play regular top-flight football at Queens Park Rangers in the second half of the 2012/13 season and never looked back. Impressed by his displays across London, then Tottenham boss Andre Villas-Boas put his faith in the wide man and two months into the following campaign he was selecting a fully-fledged England international. It was an unconventional route to stardom, but it had reaped rewards. 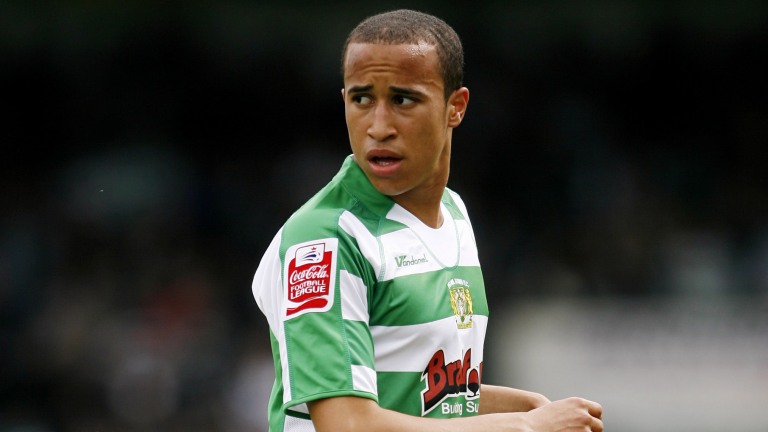 On that period of his career, Townsend recalled: “At first it was difficult but I soon realised that if I wanted to play for my hometown club then I had to keep going out on loan, proving myself and stepping up the leagues, showing the manager at each stage that I can handle the challenge. Eventually after nine loans it led to me getting into the Spurs team so it was definitely all worth it.

“It was always my decision to go out on loan and who I went to; it was never ‘you’re going here’. If it had been down to the manager at the time Harry Redknapp I wouldn’t have gone on as many loans as he always wanted me training and travelling around with the squad. I just wanted to play football and I didn’t mind what level I played at.

“I always wanted to prove myself and I knew I had to keep going out on loan to get my chance in the Premier League. The fact I supported Spurs meant it was always a dream come true to get a run in the team and off the back of that play and score for my country.”

That explosive introduction to international football against Montenegro nearly three years ago has helped add to a tally of 11 Three Lions caps and three goals. Echoing his time at QPR, another flourish in the season’s final flings after a permanent move to Newcastle United in January prompted an international recall in the summer but Townsend’s name was one of three omitted from the final squad for Euro 2016 by Roy Hodgson. 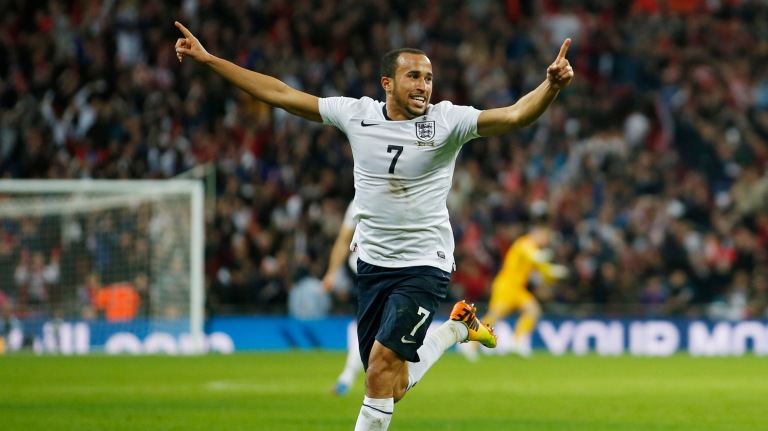 That looks set to change now Sam Allardyce has plonked himself the fieriest hot seat in English football. The Three Lions boss has claimed that the man he labelled an ‘international world-beater’ is set to ‘re-emerge’ following his move to Palace. Townsend is honest to admit that he benefited from playing for a club with a big reputation when it came to previous squad selections – something all the Eagles’ players will be hoping changes in this new era.

“It’s nice to hear that,” says Townsend of Allardyce’s praise. “However he’s already said he’s not going to pick players on loyalty, he’s going to pick those who are playing week in, week out. I know that if I’m playing well for Crystal Palace first and foremost that I will get given my chance for the national team again which is what every player wants to hear.

“It was more difficult for players in the bottom half of the table to get into the squads under the last regime and I think I benefitted from the manager’s [Hodgson] loyalty last time. Now if you’re the likes of Wilfried Zaha playing well then the manager won’t have any hesitation about throwing him in and I think that gives everyone playing in the Premier League belief, ambition and incentive.”

As for missing out on the Euros, Townsend is once again refreshingly pragmatic: “The first half of last season was probably the most frustrating time of my career. At the end of 2015 I was playing for Spurs’ under-21s so I can’t then be too disappointed six months later when I starred for Newcastle, scored four goals in 12 games and made the initial 26-man squad.”

“When I reflect I can’t be too disappointed about what I’ve done and how far I’ve come in four months but there’s a small side of me that thinks ‘if only I was there’.” 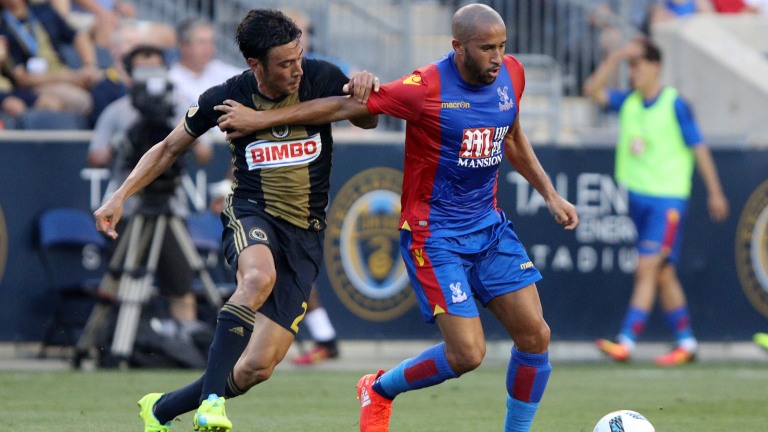 He may not have been in France, but he is now in south London and today will see him take to the Selhurst Park pitch, a place that doesn’t hold too many fond recollections for him. He has yet to play for a victorious side in SE25 during appearances for Ipswich, Leeds
and Tottenham and even received his solitary career red card on the
ground back in 2010.

“I don’t think I’ve had too many great memories of playing there!” he laughed when pressed about his history in south London.

“I remember playing for Ipswich and I got sent-off for a high foot on Julian Speroni; I haven’t apologised to him yet! I also played there for Spurs in Alan Pardew’s first game and didn’t have the best of games as we lost 2-1.

“I haven’t had the best experiences at Selhurst but I know how passionate the fans can be and if the club is doing well how loudly they back them, and now that I’m on the other side of it I’m sure I can have many special moments here.”

Hopefully another dream debut will see Townsend’s luck change, and longer term his trail of transfers too as the Selhurst faithful hope to see him produce his artistry in their corner of the capital for many years to come.