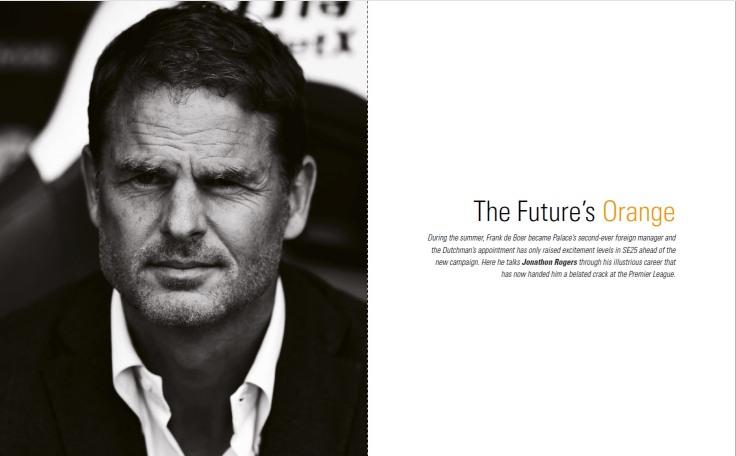 During the summer, Frank de Boer became Palace’s second-ever foreign manager and the Dutchman’s appointment has only raised excitement levels in SE25 ahead of the new campaign. Here he talks through his illustrious career that has now handed him a belated crack at the Premier League.

Frank de Boer’s road to the Selhurst Park dugout has been a lengthy one. A three-decade long association with the game as a player and manager has threaded its way through seven different countries, with silverware gathered at almost every turn.

Long journeys are something that he has been accustomed to since childhood as he made his first tentative steps in Ajax’s academy in the mid-1980s. Whittling away the many hours spent in the back seat of the family car alongside his older twin brother Ronald, De Boer junior could barely have envisioned the glittering career that would come his way as one of his era’s best defenders, and then transferring that into managerial success.

“I was 14-years-old when I started at Ajax,” the Palace boss smiled, leaning back in his chair with the same relaxed nature he regularly displayed on the pitch. “My parents had to drive me and my brother on a 140km round-trip every day for four years, so that was quite a thing that they did for us. I did it always with pleasure because I knew that I wanted to be a professional player, so to be linked to the best academy in Holland, possibly the world at that stage, was fantastic.”

It would take just four years for De Boer to reach the Amsterdam giants’ first-team, as they returned to the well to rebuild a side that had seen manager Johan Cruyff depart alongside academy graduates Frank Rijkaard and Marco van Basten. De Boer would debut in 1988, not long after Ronald, and they were followed by Dennis Bergkamp, Edwin van der Sar, Clarence Seedorf, Patrick Kluivert and Edgar Davids among others over the course of the next 11 years, ushering in a period of dominance at home and on the European stage. 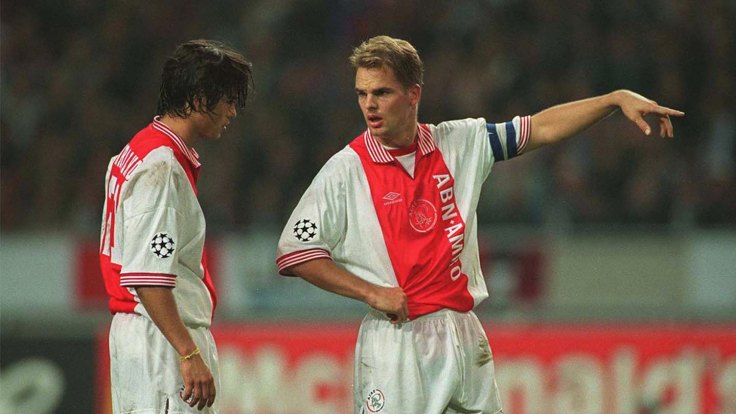 Superstars were developed and departed, but De Boer would remain the constant. He marshalled an Ajax backline that claimed five league titles, two domestic cups, the 1992 UEFA Cup and lifted the UEFA Champions League in 1995, with only a penalty shootout defeat by Juventus a year later preventing them retaining their crown.

In an era where rough and tumble, razor-elbowed centrebacks were king, De Boer was a disciple of the fabled Total Football style, possessing a cool, composed nature allowing him to defend with assurance and artistry, and a range of passing that could transform defence into attack in a split-second. It was all learned during those formative years in the Ajax academy.

“When I was a youngster I was only concentrating on myself, but when I got to around 24 or 25 I thought that there could be something special,” he said. “We had a good mixture of youngsters such as Van der Sar, Mark Overmars and Jari Litmanen as well as ones slightly older such as Danny Blind and Frank Rijkaard, and then we thought there could be a good generation.

“The structure in the club, especially in the academy, is very clear. They give young talent a good education from 10-years-old, including the mental and technical sides of the game so the basics are there when they get to the first-team. The academy was the lifeline of Ajax – they wanted 70% of their players to come from their own academy so everybody knows that when you play in this position, you have to play like this.”

Overseeing the majority of Ajax’s success was Louis van Gaal, who the new Palace manager credits as being the biggest influence on his coaching career to date. “We have a lot in common, such as how we expect players to train. I was always a player who gave everything every day and he demanded that from everyone and would notice if you were at 80% or 90%. From a technical standpoint he was one of the best; he would make a small change and the game would too.”

Therefore, when Van Gaal moved onto Barcelona and came calling for the De Boer brothers, both jumped at the opportunity to move to Catalunya. The pair’s careers’ were tightly entwined with five of Frank’s six club spells seeing him play alongside his sibling, as well as a decade together on the international scene.

Speaking about his brother, Frank said: “Of course it’s nice to have a family member around you and you can always count on them, especially when you’re twins because it’s a special bond. We have the same character but play in slightly different positions so when someone looks for that type of footballer, then you are also interested in the other one because he will also be suitable.

“It was a dream to play for Barcelona – Ajax was already a dream for me but it gave me the chance to enjoy another culture whilst playing for one of the biggest clubs in the world. It made me a world citizen and everything changed, such as the taste of food and the taste of life, but also as a professional football player it was a fantastic experience.”

After lifting a La Liga title in 1999 alongside Rivaldo and Luis Figo, Frank would enjoy three more years sampling his first taste of red and blue stripes before wanting to expand his horizons further. Aged 33 and out of contract, top of his wish list was a move to England, but despite boasting more honours on his CV than most top-flight clubs, remarkably no-one came calling. The regret of missing out on the Premier League still seems to linger, but the unwavering desire to eventually get an opportunity would ultimately work out in Palace’s favour.

“I had played more than 400 games for Ajax and 200 for Barcelona and out of contract, but there was no Premier League club interested in me,” De Boer reflected. “I went on to have a fantastic time at Galatasaray but I was always wondering if there would be a chance to play in the Premier League. I would have loved to but you have to be satisfied with what you have.

“I then played for Rangers for four months which was a great time; they offered me the chance to sign for another two years but I promised my brother that we would go to Qatar together because he had knee problems and we wanted to end our careers together.”

Despite heading into the silhouette of his playing days, De Boer’s timeless quality ensured he was called up for a fifth Holland tournament squad at Euro 2004, which would round off a 14-year association with the orange shirt. On the occasion of his 112th and final cap – a record haul at the time – he would suffer a fourth semi-final elimination as the nearly-men of the international game came so close once again.

During nearly a decade-and-a-half of Oranje service, De Boer more than played his part, being named in the Team of the Tournament at both the 1998 World Cup and Euro 2000, but looking back he feels a lack of belief cost his nation dear during a period where they were unearthing a galaxy’s-worth of stars. “We were always quite close, but I don’t think we ever thought we were the best. If we had, then maybe we could have changed fate a little bit, especially in France in 1998. If we had thought that the only prize we wanted was the World Cup, the coin might have dropped and fallen the other way.”

The boots that had fired in free-kicks, stopped the world’s best attackers in their tracks and assisted one of the World Cups’ greatest ever goals were hung up in Qatar in 2006. Having previously had no desire to be a manager, De Boer stumbled into the profession.
“Until I was 31-years-old I would have said ‘I will never be a manager!’ but then I went to Galatasaray and began to think ‘if he can be a manager, then I can also be one’. When I was in Qatar they sacked the coach so I was player/manager for the last couple of months I was there which was my first experience – and I got to manage my brother!

“The first logical step was to go back to Ajax. I was thinking of doing something in football but didn’t know exactly, so my agent said I should get my managerial licence. Back then, if you had played 100 games in the Eredivisie or had more than 40 caps for Holland then you could go on a special course for only one year. As part of that, I had to coach Ajax’s under-12s for three years and then did the under-19s for two-and-a-half years, and after that they asked me to be head coach. I didn’t have any time to think about it, and suddenly I was manager of Ajax!”

The rest would be history. By the time of his arrival in December 2010, Ajax had become a club dining out on former glories, but De Boer quickly went about re-establishing them. Handing youngsters the same first-team opportunity that he had once been afforded, Christian Eriksen, Jan Vertonghen, Toby Alderweireld and Daley Blind were unearthed, and De Boer would become the first manager to lift four successive Eredivisie titles, surprising himself in the process.

“After the second year, I said that if I didn’t win the league for a third time I would stop, and then it just continued. I was champion for four years and then in the fifth it was awful to lose the championship in the final game when we had all the best cards, but if you had offered me the chance to win four league titles in five-and-a-half years I would have signed straight away.”

Still stewing at seeing PSV Eindhoven leapfrog his team on the final day to deny them a fifth title, De Boer resigned and soon joined Inter Milan in 2016, but his time at the San Siro lasted a ridiculous 85 days before the club’s new Chinese owners ousted him. “It was a disappointment because when you sign a contract for three years you want to see it out until the end,” he said. “That wasn’t the case and took up a lot of my energy, especially learning the language because I was speaking Italian in press conferences after only two months. We had to change a lot of things at the club, so it was quite hard.”

However, Inter’s loss would prove to be Palace’s gain. 14 years after missing out on sampling the Premier League, the Dutchman finally has his chance.