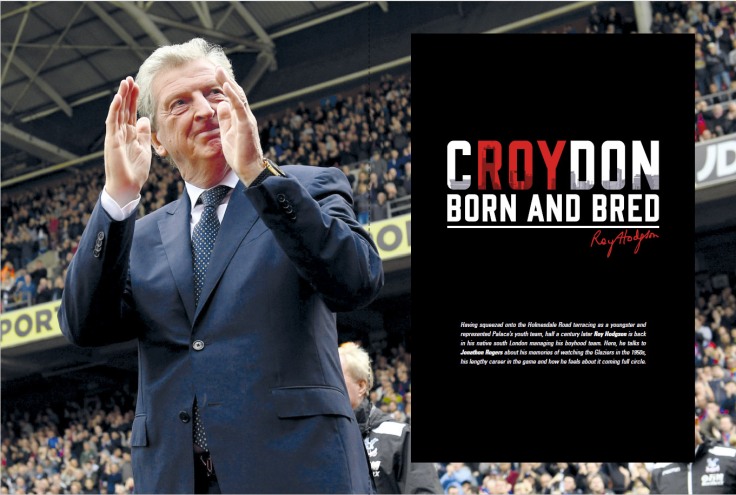 Having squeezed onto the Holmesdale Road terracing as a youngster and represented Palace’s youth team, half a century later Roy Hodgson is back in his native south London managing his boyhood team. Here, he talks about his memories of watching the Glaziers in the 1950s, his lengthy career in the game and how he feels about it coming full circle.

As Roy Hodgson strode proudly down the touchline ahead of his first game in charge of the Eagles back in September, he could have been forgiven if he had paused for a split-second to rewind the clock over 60 years.

Selhurst Park looked very different back then, but the memories would have come flooding back: the steep grass and concrete banking on three sides of the ground, an embryonic floodlighting system consisting of lamps strapped to rickety poles and shattered peanut shells scattered on the floor. However, it was on the same green rectangle in south London where Hodgson’s eight-decade love affair with football would begin.

Reflecting on his first ever visit to the famous old ground, he said: “I was only six so it would have been in 1953 or 1954. One of my earliest memories is being taken to a game and sitting on the crossbar at the Holmesdale Road end with my dad holding onto me from behind, and then later it was being down the front where the peanut seller would come around. You would be hoping that someone would kick the ball behind the goal and you might get a chance to kick it back!

“I remember certain names from that period such as Tony Collins, Roy Greenwood, Jack Edwards and Cliff Holton, but it was more in the 1960s that I have the strongest memories; I can recall watching the likes of Johnny McNichol, Johnny Byrne and Terry Long.

“I’ve always kept a very close eye on the club because the team you support first in your life is the one that stays with you. I would be exaggerating to say that I’ve always had the thought that I would come here to manage, but it’s great that it’s come off. On my drive to work each day I skirt East Croydon and Addiscombe and places that I can remember so well from my youth. Not so much has changed, just that the odd building has gone up and some of the old shops have disappeared.”

Having packed his bags aged 24 to embark on an odyssey that would take him to every corner of the globe, Hodgson’s recent homecoming has seen his career come full-circle.

Born in Croydon in 1947, he was quickly making friendships that would prove hugely influential in later life; as a child he lived in the same apartment as Palace great Steve Kember, and they both attended John Ruskin Grammar School in Shirley alongside former Eagles assistant boss Lennie Lawrence and another hugely experienced manager in Bob Houghton.

“Steve and I grew up together because his father was a conductor on the bus that my dad drove,” Hodgson revealed. “His dad Dennis found a house in West Croydon that was divided into two flats, and they took one and my dad took the second. There was an L-shaped back yard and the end of it was a relatively square area, so it was absolutely perfect for our football matches.

“Bob, Lennie and I didn’t have the successful playing career that Steve had, but you could argue that it is strange that four boys from the same school that were close friends and played together for the school team on a Wednesday afternoon all ended up coaching at a good level.”

In the mid-1960s, a teenage Hodgson would be invited to spend evenings training with Palace’s youth team, but his original Selhurst spell was short-lived and he would drop into the nonleague game, carving out a modest career as a midfielder and later at left-back with Tonbridge Angels, Gravesend & Northfleet, Maidstone United and Ashford Town, while also gaining his coaching badges and earning a living as a PE teacher at Alleyn’s School in Dulwich.

However it was in South Africa rather than south London where he spent the happiest of his playing days with Pretoriabased outfit Berea Park under Houghton, whom he had previously been assistant to at Maidstone. “That was probably the most fun time in my playing career,” said Hodgson. “It’s where I began to know how to become some sort of player, although I was already in my mid-20s so it took a long time!”

It was in 1976, coupling playing for Carshalton Athletic under Lawrence with teaching at Monks Hill Comprehensive in Croydon, that his big break arrived. Having left his childhood friend behind in South Africa, Houghton was making waves in Sweden by winning successive league titles with Malmo, and when Halmstad approached him for a recommendation for their own young English coach filled with revolutionary ideas, Hodgson was quickly appointed.

Introductions such as zonal marking, a high press and swift counter-attacking saw him showered in silverware, both at Halmstad and during the 1980s at Malmo where Hodgson would improve on Houghton’s glory days. 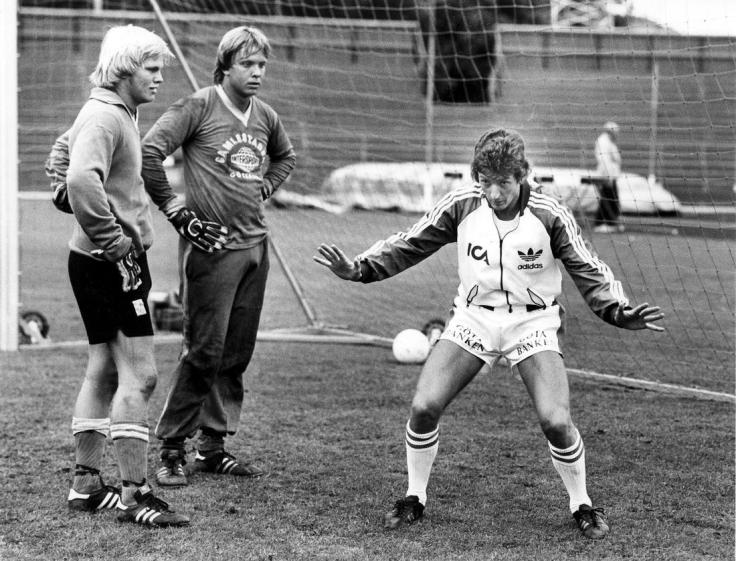 “We dominated,” Hodgson proudly smiles when he looks back on the fledgling years of his and Houghton’s still-legendary stints in Sweden. “Bob won the league 1974 and 1975 and I won it 1976, then he won it in 1977 and I won it again 1979, and there was another successful period between 1984 and 1989 because I won it every year.

“There was no real secret to it; I was lucky to work with a group of Swedish players who wanted to improve their game. I’m the type of coach that flourishes in that type of environment, and I had players who believed that we could be successful if we got better as a team.”

As the 1980s gave way to a new decade and seeking a new challenge, Hodgson moved to Swiss club Neuchâtel Xamax whom he took into the UEFA Cup, before he jumped at the chance to become the man to finally end Switzerland’s decades of despair at failing to reach major championships. They reached the last-16 of the 1994 World Cup, despite being drawn alongside Italy, Portugal and Scotland in qualifying, and after easing into Euro 96 they were ranked as high as third in the FIFA World Rankings. 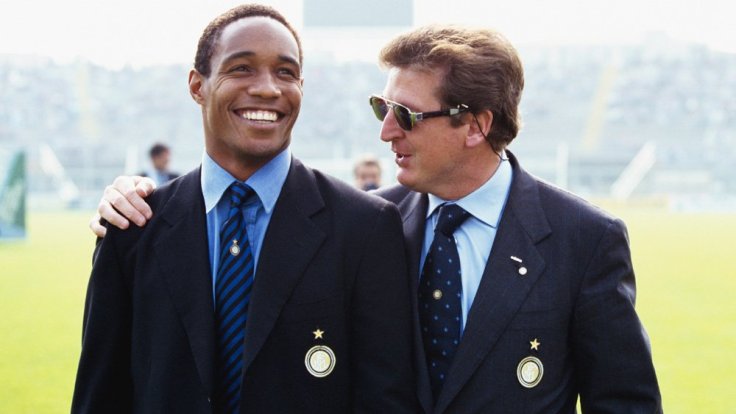 Having knocked Inter Milan out of the European Cup in 1989 while at Malmo and taking four points off the Italians in World Cup qualifying, Hodgson’s stock in the country was high. In 1995 Inter were on their knees, sitting in Serie A’s relegation zone and lacking star power, so poached Switzerland’s coach to rebuild them. At the end of his first full season Hodgson had led them to a third-place finish and a UEFA Cup final, but decided to let his contract run down. “It was tough,” he reflected.

“It was the first time that I got embroiled in the politics of football and the enormous pressure that comes as a coach of a top club, so I learnt a lot when I was there.”

A first taste of the Premier League would follow at Blackburn Rovers, whom he again took into the UEFA Cup, but after a poor start to the 1998/99 season he was dismissed. Remarkably, it would be almost a decade until he was handed another crack in England, despite claiming another league title in Denmark with FC Copenhagen, but finally in 2007 he undertook a seemingly impossible task of keeping Fulham in the division, who had won just two league games by December.

A run of 12 points from the last five games of the season sealed a famous escape, before a superb seventh-place finish in 2008/09 allowed Hodgson to try his luck in Europe once again. What ensued was a fairytale run to the Europa League final before the Cottagers were pipped to their first major trophy by Atletico Madrid after extra-time.

Using words that will resonate with Eagles fans and their club’s current predicament, Hodgson said of his time in west London: “It was similar to my experiences in Sweden. It was a group of players who had Premier League qualities, but they realised that there was only one way to get out of trouble and that was to work hard, become a team and make certain that we knew what we’re doing. Luckily it kept us in the league by the skin of our teeth, but the following year we brought in one or two players who took it on to a different level.”

His reputation restored after an unfair tarnishing following his time at Ewood Park, Hodgson would manage Liverpool and West Bromwich Albion before finally landing the job that had always escaped him.

He took charge of England in three major finals, oversaw the phasing out of a golden generation while introducing fresh faces and boasted a virtually impeccable record in qualifying, but like so many others before him, couldn’t immortalise himself in the nation’s footballing folklore by guiding the Three Lions to that elusive second major championship.

“My name had been mentioned on several occasions – when Hoddle left, when Eriksson left and before Capello was appointed, but when it actually came around it was like a hope had been recognised. I enjoyed my four years there working with the best players that the country has and I think you can still see the benefits of that today.

“The tournaments were the problem, as they have been for many years. What we did in the build-up to them was far greater than what we achieved in them, and there are so many theories as to why but I feel as though we could have done a lot better in all three of the tournaments so that’s the disappointment, but the work we put into becoming the team that we were went quite well.”

Having managed in eight countries across three continents over 40 years, English football’s most travelled coach has now finally managed to find his way home. Selhurst Park may be a short distance from Hodgson’s old stomping ground of West Croydon, but it’s been a long time in the making.