Having rippled the back of the net three times in six games this campaign, Wilfried Zaha is in red hot form. Here, he talks about his season so far, including his deadliness in front of goal, a homecoming in the Ivory Coast and an upcoming return to a certain Amex Stadium.

It’s an image that Eagles fans in all four corners of Selhurst Park are becoming very used to: a beaming Wilfried Zaha sprinting down the touchline, fists clenched and pumping, screaming in joy after producing his latest moment of artistry. In the background, his teammates trail in his wake desperate to mob him, with the ball nestled in the back of the net. Simply put, for fans with a red and blue affiliation, it’s a thing of beauty that they never tire of seeing.

In each of the past three occasions in SE25, the jewel in Palace’s crown has etched his name onto the scoresheet, as well as into club folklore, with vital goals that have helped breathe life back into his team’s season. They’ve come in all shapes and sizes; a slaloming run and precise finish against Chelsea was bettered by a mazy, seemingly never-ending dribble and unerring shot in the dying embers against West Ham United, before he showed a poacher’s instinct against Everton last weekend.

When you add those strikes to the four he bagged at the back end of last season, it means 2017 has been Zaha’s best goalscoring year by far. Bearing that in mind, it’s easy to forget that things haven’t always been this way for the local hero, who admits he was guilty of lacking composure earlier in his career and believes his recent purple patch isn’t down to luck, just sheer hard work.

“My shooting had to get better!” Zaha laughs loudly, in relaxed mood at the training ground. “It wasn’t really on target most of the time but over the years I’ve been working on it. It’s a big aspect of my game now – if you don’t shoot, you don’t score and I’m getting into more shooting opportunities and just taking my chances. Reidy [Steven Reid] has been staying out with us, helping us work on our technique and it’s paid off. Being out there for hours kills your legs but to score a 97th minute equaliser makes it worth it. 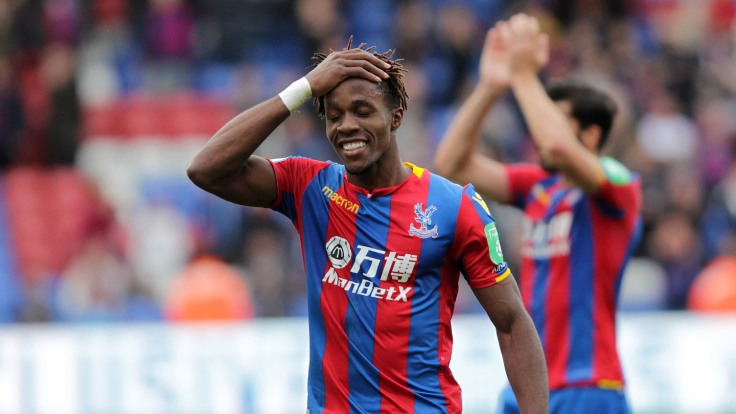 “Scoring goals is massive for me, my confidence, the team and the fans. I literally can’t control my celebrations; it’s just straight passion because I know we need the goals and I’m happy to be the person scoring them. When there are thousands of people watching you there is pressure, but it’s pressure I’ve had for a while and I feel like it’s good because it motivates you to play better, and I’ll take the pressure on my shoulders like I have done before.”

The epitome of South London and Proud, Zaha’s three goals have come in just six league appearances this term, moving him up to third place in the Eagles’ all-time Premier League top scorers chart with 15 to his name, behind only Chris Armstrong and Andrew Johnson. He could have been well on his way to chasing down the two club legends had it not been for a knee injury sustained on the opening day against Huddersfield Town, and having been desperate to show that his goal glut towards the end of last season was a new-found rule rather than an exception, he admits that setback came at just the wrong time.

“Personally I feel that after last year this is a big season for me, especially scoring the amount of goals I did in the Premier League, so getting injured was a proper knock-down,” he said, honest as ever. “It was annoying because I was sitting there thinking ‘I know we’re better than this’; the confidence was going and people weren’t seeming like themselves. Thankfully things seem to be changing back again.

“It wasn’t a good start with the injury but for me personally I’ve been scoring goals for the team and performing well statswise, which is great because I have to start fulfilling my potential; I’m getting older now and the dots have to start connecting.”

What makes Palace’s recent performances all the more remarkable is that they’ve been frightening defences without a recognised striker. With Christian Benteke sidelined, Roy Hodgson opted for an unorthodox partnership of Zaha and his fellow jetheeled winger Andros Townsend in attack, and despite a lack of familiarity with the position, Zaha has thrived. 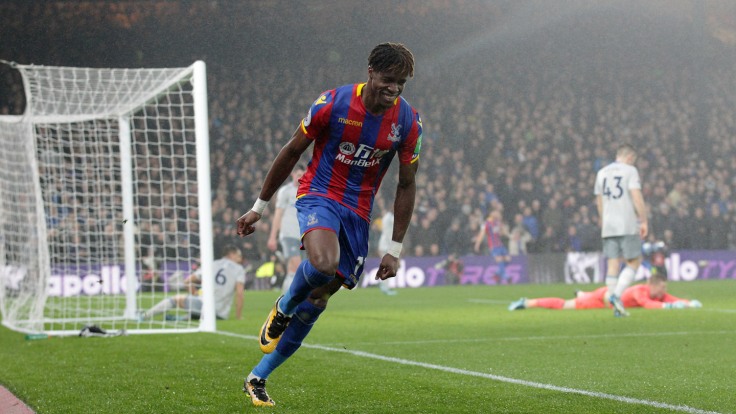 Since marking his return by netting the goal that claimed a first win of the campaign at champions Chelsea’s expense, he has scored in back-to-back home games for Palace for the first time in his career, and since extended that run to three matches. Meanwhile, the Eagles have netted two or more times at Selhurst Park in three consecutive matches for the first time in the top-flight since 1991, giving food for thought to the academy graduate as to where his future might lie.

Reflecting on his and Townsend’s stint in attack, Zaha said: “It stretched defences at times and we connected well as we’re good technically. As wingers playing against centre-backs it’s much easier for us not having to take on a full-back and then another defender as well, whereas we were beating one man and then we’re in on goal.

“I’m not the bog standard striker but I’m working on it. It’s been hard but it gives you the freedom to move around and not stick to one position, and allowed me to get on the ball a lot more, so I’ve enjoyed it. It’s definitely a position I could see myself playing in the future; I can’t play up top by myself, but if I play there with someone I think I can get more goals.”

As well as battling back from injury to be fit for his club, Zaha also managed to recover in time to try and help Ivory Coast reach their fourth successive World Cup earlier this month. As well as featuring in a winner-take-all showdown with Morocco, the trip would prove to be a poignant one as he returned to the country of his birth for the first time since arriving in Croydon as an infant.

While a 2-0 defeat in Abidjan meant that his dream of featuring in football’s global showpiece would be put on ice for another four years, his disappointment was quelled by managing to get back in touch with his roots. Reflecting on his time in north-west Africa, he said: “I had come to England when I was four and I hadn’t been there since, so it was nice. Seeing the fans and the love they have for the players is just crazy – it’s just like Crystal Palace. Having the whole country supporting you is amazing, so it was nice being back there. My mum was there and I finally managed to see her house; I bought it for her and she gave me a little tour around it, so that was a proud moment.

“It was a little bit of a break but there was pressure as well. I’ve never played a game where I had the chance to go to the World Cup, and obviously it didn’t go the way I wanted. I wanted to get there because to have played in a World Cup aged 25 would have been great, but things don’t work out how you want them to all the time, but I’ll keep working at it. I’m enjoying my football right now but I think in four years’ time I’ll have more experience and be ready for it.”

Now with his feet back in south London and his mind firmly set on Palace, another huge game looms large on Zaha’s horizon. Next week brings a derby day meeting with Brighton, as the Eagles and Seagulls clash for the first time since the winger’s two goals on enemy territory saw Palace end their arch-rivals’ promotion hopes on a memorable night for everyone involved.

“That is my best game for Palace because the stakes were high and you have to step up,” he happily reminisced. “That day I was focused on the job and we managed to it. I was nervous before the game because we had played them away before the play-offs and they beat us 3-0, and we did nothing – it was literally like a training ground game. It was also a bit nerve-racking not having Muzza [Glenn Murray] going into the second leg, but someone had to step up.

“Scoring those two goals were crazy because I was getting so much stick, even in the warm-up. There was one guy that will always stick in my head – just as I went into the changing room before the game he shouted ‘it’s over’ and I heard him above everyone, so it was nice beating them that day after all the chat.

“I’m looking forward to playing them again, it should be a good game. The atmosphere in those matches is crazy, I can’t really compare it to anything. As soon as you step out onto the pitch, it’s game on, and I’m sure we will all be focused on that day. All the players know the importance of it by now; we obviously speak about it amongst ourselves, so everyone know it’s a big game and we need to win it.” If on Tuesday night there is another passionate Zaha celebration to add to the collection, that image could be the finest masterpiece of them all.