Surely no-one has become a cult hero at Palace quicker than Mamadou Sakho. His eight-game cameo helping the Eagles avoid the drop last season has already gone down in club folklore, and paved the way for his permanent move in the final moments of the summer window. Now, he is ready to do it all again.

From the moment he first stepped onto the pitch against Middlesbrough in February to make his Eagles bow, Mamadou Sakho’s impact and quality came to the fore. Four wins were yielded from his first four outings, and by the time the maverick defender limped off which a season-curtailing knee injury against Tottenham Hotspur 10 weeks later, Sam Allardyce’s team had won five and drawn one of the eight matches that the Frenchman featured in to move away from the relegation zone, equating to 39% of the club’s total points haul last term.

However, it wasn’t just his effectiveness on that pitch that saw supporters clamouring for the club to make his move permanent. They fell in love with his unique style of defending, which sometimes comes across as chaotic but is usually highly effective with Sakho deceptively in control of the situation, playing the game almost in his image; leading to unorthodox moments such as slide-tackling referees, or diving headfirst to make a crucial block.

He celebrated on crutches when the Eagles stayed up against Hull City back in May, and then he was gone. Palace fans pleaded with him on social media to return as rumours circulated all summer that he might be tempted by a longer stay, and with seconds remaining on transfer deadline day, that was the case. He admits that the feeling of being wanted played a huge role in his decision.

“For me, the most important thing in my life is to be happy,” he revealed. “When I was at PSG it was the city that I grew up in, so it was natural for me to play there with my family and friends close. When I signed for Liverpool it was a really good time, and I had some exceptional moments there. However, Palace was the best choice for me because they are in London and I have friends here, and my wife and my kids loved it last year when I was on loan.”

His current stint in south London is the latest chapter in a remarkable tale so far. Born in Paris in 1990 as the fourth child among seven, Sakho was spotted by Paris St Germain as a 12-year-old. Having started out as a striker he was quickly repositioned into the heart of the defence, where he would remain. Helping the club win an under-18 championship despite being three years younger than his team-mates.

He seemed destined for the top, but no-one could have predicted how quickly or impactful. A day after turning 17, he made his professional bow in a UEFA Cup tie against AEK Athens in February 2007 and by October that year, he was the youngest captain in the club’s – and indeed Ligue 1’s – history. In the days before the Parisians were bankrolled by Qatari billions, Sakho would help them collect silverware the hard way, as well as picking up personal accolades such as being crowned France’s Young Player of the Year in 2010. He also began developing leadership techniques such as his changing room pre-game rallying call, which has made its way to south London.

Despite all the success he has enjoyed with the armband wrapped tightly around his bicep, he admits it’s something he’s never really had to work on. “I just stay the same, with the captaincy or without. I just try to give my best for the team and speak to the players like I usually do, and I don’t change my mentality. The most important thing for me is to give the best for the team and finish the game proud; sometimes you lose and sometime you win, but if you can you leave the pitch with your head up, you’ve done your best.

“I just try to be my natural character. I’m always the same and try to help my teammates and be positive. In life, you can have difficult moments but you must look ahead, and with football you have to be a good example for the rest of the squad. I don’t see myself as a leader, but I am naturally like this. I joke when I have to joke, but when it’s time to work you will see my eyes change.”

Captaincy would also be a role he undertook with France’s youth sides, until in November 2010 he won his first full cap at Wembley against England. After three more successful years at PSG, culminating in the beginning of their current domestic domination by winning the 2012/13 Ligue 1 title, England would become his home for good as he opted to join Liverpool in September 2013 for £18 million.

His first year at Anfield would see him feature in one of the most famous games held in SE25 as the Reds’ unexpected championship challenge was derailed at Selhurst Park thanks to Dwight Gayle’s brace, following which he participated in the 2014 World Cup – a tournament Les Bleus only qualified for via a play-off win against Ukraine, aided by a pair of vital goals from an unexpected source in Sakho.

There would be similar moments of glory at Anfield, such as netting another crucial goal as Liverpool came back from the dead to beat Borussia Dortmund on their way to the Europa League final in 2016, and a week later he added to his cult hero status on the red half of Merseyside by notching in a derby victory against Everton. However, that would prove to be his final outing for the club, as he was handed a 60-day ban by UEFA for consuming a banned fat-burning substance flagged up in a routine post-match drugs test.

Sakho successfully cleared his name and ended his suspension, but not before he had been forced to sit out the Europa League final defeat to Sevilla, and painfully miss out on a place at Euro 2016 in his homeland due to inactivity. Then, injuries and disagreements with Jürgen Klopp saw him fall out of favour with his club. A change was sought, and Palace became his new home. Looking back on that time in his life, he said: “I really enjoyed my four seasons at Liverpool, I met some great players and people in the training ground, and the fans were great. I know they love me but I also love them, so it was a good time for everybody.

“It’s really important for a player to feel warm and loved. Last year at Palace was a good time for all the squad at the end of the season because we did something exceptional. Staying up was a good job by everyone at the club including the players, the people who work with us, the staff and the fans, so they were good memories.”

Those memories were still fresh as Sakho walked back through the doors of the Beckenham training ground in September, but things had changed. Frank de Boer was occupying Sam Allardyce’s old office, and then before Sakho had worked up enough fitness to impress the Dutchman, his room was being vacated for Roy Hodgson. However, Sakho is enjoying learning from someone so vastly experienced in the game.

“It wasn’t the best situation for me because I arrived at the last minute in the transfer window, and after that the manager left two weeks later,” he said. “For me, the most important thing was to stay focussed on my work and training because I hadn’t played at Liverpool, and make sure I was ready when I was called up.

“He [Hodgson] has a lot of experience and spoke to the players, and explained exactly what he wants, and now the players understand it and that’s why we have been playing better. We must listen to him because he started managing before I was even born! If you look at how many games each player has played, he might have managed more games than all of us put together, so we must take on board what he says.” 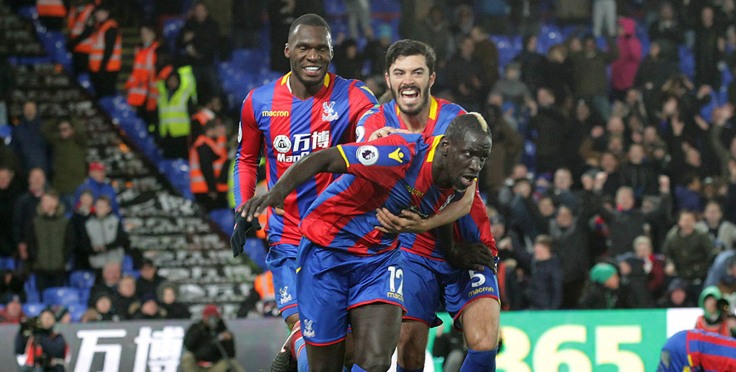 As we head into 2018, the Frenchman can be forgiven for feeling a sense of déjà vu as he prepares himself for a relegation scrap during the final months of the campaign, but having seen an upturn in fortunes for Palace, he is aiming to once again play his part in another dramatic escape once he recovers from a calf injury, and continue his love affair with the Eagles fans.

On his team’s survival chances, he added: “In football, everything needs to start somewhere. We’re beginning to play the way the manager wants us to, and that’s good for the club. You can build a good team and mentality with time.

“I’m really optimistic because I believe in this squad and the quality we have, and we have a good manager with a lot of experience. We will improve and everything will get better. I have only one objective in every game and that is to win three points; I don’t look at the table to see the situation at the bottom, my only obsession is to look at the teams above us and try and pass them. I think in a few weeks it’ll be different.

“We need to take it game by game, so we will continue to fight. Every game in the Premier League is difficult so we need to concentrate on what we can control, and believe.”