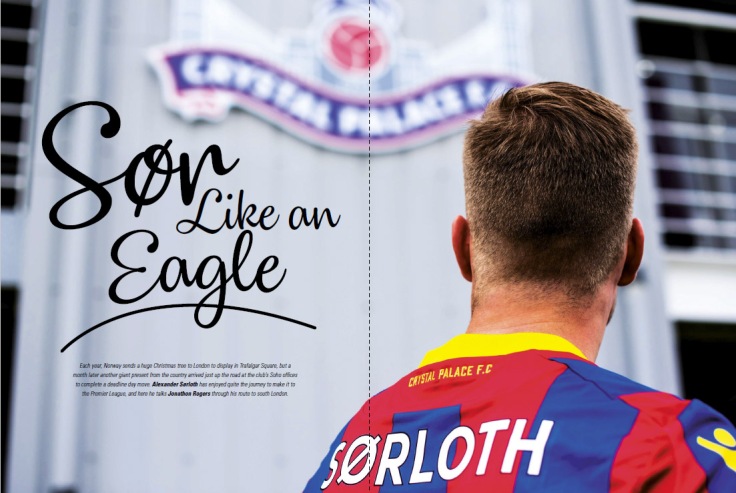 Each year, Norway sends a huge Christmas tree to London to display in Trafalgar Square, but a month later another giant present from the country arrived just up the road at the club’s Soho offices to complete a deadline day move. Alexander Sørloth has enjoyed quite the journey to make it to the Premier League, and here he talks through his route to south London.

It was a little over a month ago that Alexander Sørloth’s phone rang, and a sense of dread crept over him. Requiring attention was his agent, and having already embarked on an odyssey that had taken Sørloth to three countries over 18 months, the Norway international knew what awaited him on the other end of the line.

It seemed the wrong time for a transfer; after all, he had only arrived at FC Midtjylland less than eight months earlier, and the 22-year-old was just getting settled. He was banging in the goals that had fired his team to the top of the table, and having endured a frustrating time in Holland with Groningen, Sørloth felt like his talents were finally being appreciated. Life was good, so why turn it upside down again?

But once his agent explained who the interested party was, Sørloth knew the upheaval was worth it. He might stand at 6’4” tall, but it was his talent and potential that saw the attacker installed head and shoulders above Palace’s other transfer targets, and having been hypnotised by the magic of the Premier League as an infant, Sørloth leapt at the unexpected opportunity. 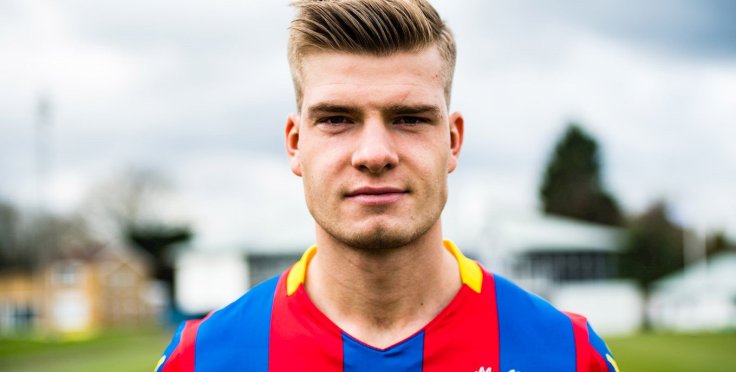 Looking back on a whirlwind few weeks, he said: “It was a surprise. I heard about it around the middle of January; I have two agents and one of them only calls when there is a club that are ready to buy me. When I saw his name come on my phone, I thought, ‘oh no, not now’, because we were leading the league and I was playing the best football of my career, but when he said it was Crystal Palace, you have to go for it.

“It’s really rare for a Scandinavian player to go directly from Denmark, Norway or Sweden to the Premier League. I remember Brede Hangeland did; he didn’t play that many games here but he was really good and someone to look up to, but Jonathan Parr plays for Stronsograd in Norway and I know him well, and Steffen Iversen is one of my idols. I remember watching my first game when I was in a pub in Trondheim with my dad, when I was six or seven, and it was Chelsea v Tottenham – Gianfranco Zola was really good that day.”

The man chaperoning him would also have appreciated Zola’s masterclass, as Goran Sørloth was deemed as one of the best strikers in Norwegian football during the late 1980s and early 1990s. Alexander grew up in a house with five Danish league title winners’ medals on the mantelpiece, alongside two Striker of the Year awards and 55 Norway caps, including one from the 1994 World Cup. Having come from good footballing stock, Sørloth junior was soon on his way to continuing the legacy. “It hasn’t been too difficult because I went my own way,” he explained. “When I play for the national team it gets quite a lot of attention, but it’s getting less and less. He still gets mentioned, which I think is great, because he keeps his name alive!”

Having been born in Trondheim, it seemed like it was Sørloth’s destiny to follow in his father’s footsteps and play for Rosenborg. He swiftly progressed through their youth ranks to make his first-team debut in a UEFA Europa League qualifier against Crusaders as a raw 17-year-old. Within 12 minutes, the name Sørloth was scrawled on a Rosenborg scoresheet for the first time in 20 years, however, that would prove to be his high point at the team where his father had been an icon.

“I couldn’t have had it better there,” Sørloth said. “I still have a lot of friends from when I was in the youth teams, and I had some great coaches who taught me a lot. Scoring on my debut was amazing, but when you do that at 17-years-old, you think that things are just going to go one way, but I had to struggle a little bit. I didn’t get enough minutes and my physique changed because I grew at lot in terms of height and weight, so that was difficult for my body, and I was injured a lot.”

Experiencing the trials and tribulations that many teenage hot prospects face, Sørloth would finally find his feet during a loan spell with Bodø/Glimt in 2015. Despite swapping life at the most successful club in Norwegian football history for one that attracted the second-lowest top-flight crowds, Sørloth flourished as the proverbial big fish in a small pond, netting 14 times in 29 appearances to prove that his potential could match his pedigree. 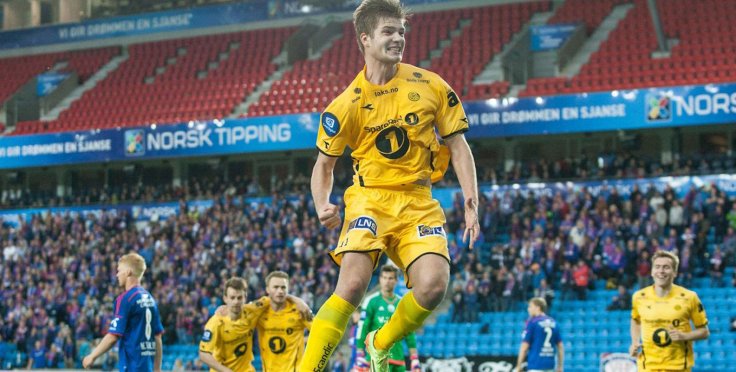 “Things didn’t start as well as hoped,” he reminisced. “I hardly played in the first 10 games, so I had to find my way into the squad, and after I did that things only went one way. I scored 13 goals from 18 starts, so that was a good place to learn a lot. It always felt like I had a lion right behind me because the coach didn’t give me anything for free, so I had to perform and stay on my toes.”

Despite impressing during his season away, he returned home to Rosenborg, who were just rediscovering their domination of the domestic game. Sensing a blocked pathway to first-team action, in November 2015, Sørloth opted for a fresh start with Groningen, a club who in recent years have handed chances to diamonds in the rough such as Arjen Robben, Luis Suarez and Virgil van Dijk.

Sørloth would be given few opportunities to add his name to that illustrious list. Things began brightly with a goal on his debut and a second three games later. But he would start just nine more league games over the following 18 months.

“I thought the move was crucial for my development,” Sørloth admitted. “The top scorer in the league was at Rosenborg and they bought another one in too, so it was difficult to find the playing time. However, at Groningen, it was a different kind of mindset; it was more about helping the individual and not much of a team game, and that didn’t suit me.

“It wasn’t easy as you always want to play. I had a really strong start but then I got some injuries. The coach who bought me then got fired, and after that there weren’t that many minutes and it was a difficult time. However, it ended up being a good experience because I think I had the best six months of training in my career. I didn’t get any worse being at Groningen, and by the time I started at Midtjylland, I was in good shape.”

Amongst the frustration in northern Netherlands, his fine form for Bodø/Glimt had caught the attention of Norway manager Per-Mathias Høgmo, who, having seen his side fail to end their long absence at international tournaments, began to look to the future. Having been capped at every age level from under-16 upwards, Sørloth was earmarked for a step-up and followed in his father’s footsteps once again, coming off the bench for the final four minutes against Portugal in May 2016.

It may have been an inauspicious start to life as a full international, but three days later, he made his mark by scoring the winner in a 3-2 win against Iceland, in Oslo. Managing the opposition that day was Lars Lagerbeck, a veteran of seven major tournaments who was handed Norway’s top job in February. Having experienced Sørloth’s clinicalness up close, Lagerbeck has put his faith in the hitman by capping him in five of Norway’s last six matches.

“To wear your national team shirt is a special thing,” Sørloth said. “My friends and family were there when I scored my first goal, and that was massive. We have some really good players, and now we have two strikers playing in the Premier League with Josh King and myself, so that can hopefully help. I think the Norwegian squad is promising.”

Having had a taste of international football, Sørloth wasn’t going to waste any more time feeding on scraps of club action. When the opportunity arrived to switch to Danish side Midtjylland back in June, and Sørloth seized it; the goals started pouring in. Left-footed volleys, towering headers, tap-ins and composed finishes were all included in a tally of 14 strikes from 19 starts. It didn’t take long for the scouts to start circling.

“I just wanted to find somewhere to play, and I knew Midtjylland were the top team in Denmark and they had scouted me really well, so I strongly believed I would do well there and I did. In the beginning, I didn’t play – I was just getting into the squad and learning how they played. But then our first-choice striker got injured and I played in the Europa League and scored two goals, and after that things skyrocketed.”

Before he knew it, his phone was ringing and another adventure awaited. 16 years after first experiencing the Premier League on television in that Trondheim pub, Sørloth now has the chance to become one of its shining stars.