If he takes up his usual position between the sticks for the Eagles today against Liverpool, then Wayne Hennessey will complete a century of Palace appearances. Here, the shot-stopper talks about his battle to establish himself as the club’s number one, and his pride at outlasting his rivals to reach three figures.

For most long-serving goalkeepers, reaching a century of appearances for one club is usually an unheralded formality, quickly completed after a couple of injury-free seasons. Simply put, that’s not the way things have worked out for Wayne Hennessey at Palace, who has had to claw and scrap to get to within a fingertip of 100 Eagles outings, which he could finally complete this afternoon.

Initially beginning life as Julian Speroni’s understudy in February 2014, twice he saw fleeting runs in the first-team ended by new arrivals intended to be the club’s first-choice custodian, only for a determined Hennessey to rise to the challenge and eventually become Palace’s undisputed number one himself.

Since Alex McCarthy’s demotion to the bench in September 2015 after a shaky start to life in south London, Hennessey has maximised his opportunity. 91 of his 99 appearances have come in the Eagles’ last 112 matches, even with last season’s arrival of French international Steve Mandanda who also soon found himself sidelined as Hennessey’s 6’7” presence was again preferred between the Palace posts.

With all obstacles overcome, he can look back fondly on his time at Selhurst, saying: “Moving to Crystal Palace was a nice challenge for me, and since I’ve come here I’ve loved every minute. Football is a strange game filled with ups and downs, but to make my 100th appearance for Palace will be amazing.

“We might have had a lot of managers since I’ve been here but there’s always been a great bunch of lads. From the moment I first walked through the training ground and met everyone, they’ve been excellent, as well as the fans.

“As a goalkeeper, at the end of the day there’s only one shirt and whoever is available and playing well at the time grabs it. All the keepers that I’ve challenged here have been brilliant and fantastic off the field too; players come and go but we’ve all stayed in touch. It’s been a pleasure.”

As is always the case when the gloves are pulled on, goalkeepers will either be the hero or villain and the 31-year-old’s time at Palace has been no different, filled with as many ups and downs as a swerving free-kick from range flying towards him. Man-of-the-match displays and showpiece occasions at Wembley are offset by the odd mishap or run of poor form, but the good days have outweighed the bad during Hennessey’s seasons in the spotlight.

Evaluating the past four years, he said: “When I look back at my best games, Chelsea away last season is definitely up there, as well as the home game against Southampton when I made a couple of good saves, including one in the last few seconds against Shane Long. However, the FA Cup final would be the most memorable moment. It was devastating to lose but to get that far was incredible, however sadly Manchester United turned it on against us in the second half of extra-time.

“The worst moment would be the game at Aston Villa [in 2016] where I took my eye off the ball and it went in, but being a goalkeeper you go through good and bad moments, and eventually it balances out. You have to be strong-minded and you can’t let things affect you – that’s part and parcel of being a goalkeeper.”

Hennessey suffered another setback this season when a back injury struck in the build-up to the Chelsea game in October, allowing Speroni to step in and help Palace claim their first points of the campaign. That was enough to see Hennessey’s tight grip on the jersey slip away after a run of 34 straight league appearances. 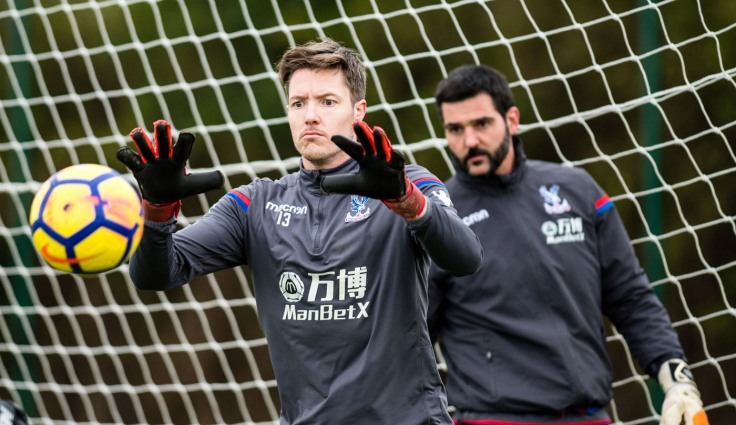 Since then a tug-of-war has broken out over the number one shirt, with Speroni and Hennessey benefiting from each other’s niggles and twinges. But since Roy Hodgson recalled the Welshman for the clash with Manchester City in December and he emerged from the meeting with Pep Guardiola’s unstoppable force with his clean sheet intact, the Bangor-born shot-stopper has played in all 13 games in 2018.

Evaluating his season so far, Hennessey said: “I went through a sticky patch and Jules came in and did very well; it’s just a shame that he got injured but that’s goalkeeping for you. I hope I can stay in the team now until the end of the season – I want to be out there as much as possible and putting that shirt on, while playing to the best of my ability.

“Competition is healthy as it keeps you on your toes. There’s always someone that wants that shirt and since I’ve been at the club there’s always been one or two wanting it, so you have to stay alert. Diego Cavalieri has recently come in too and he’s a very good goalkeeper, his English is getting a lot better and he’s a great guy to work with.”

Cavalieri’s arrival isn’t the only change Hennessey has had to adapt to this term, with his long-time working relationship with goalkeeping coach Martyn Margetson coming to an end after he opted to leave Palace to reunite with Sam Allardyce at Everton. Hodgson moved to bring in ex-Republic of Ireland international Dean Kiely as his replacement, and despite seeing a close friend depart, Hennessey is enjoying working with a new, but familiar, face.

“I’ve spent a lot of my career with Martyn and we’ve had some special times together such as at the Euros with Wales, and he’s a nice guy and a fantastic coach,” Hennessey said. “He had the opportunity to work with Sam again who he’s close with and they work well together, so he had to go and fair play to him.

“We’ve been lucky that Dean Kiely has come in and fitted into that slot. I remember playing against him years ago which shows how old I am! I made my debut at 18 so I’m always meeting people as I go through my career and think: ‘I remember playing against you’, so when Deano arrived we had a little joke about it. He’s been fantastic since he’s come in; it’s nice to gain feedback off someone who has done loads in his career and been through the same situations that I have done, and still have to face.”

That last statement shows that the 73-time capped keeper has one well-trained eye on his next stage of his career, but a big decision looms large in his short-term future. His Eagles contract expires this summer, which will either mean a continuation of his four-year association with the club or bring about the end of it, but he is forthright when he discusses where he hopes to be donning his gloves next season.

“I’m hoping my future is at Crystal Palace but we’ll see,” he revealed. “When the season is finished we’ll sit down and discuss and hopefully I’ll remain a Palace player. I like playing football here and I get on so well with the staff and the players, so I want to stay.”

Having lost and regained his starting spot, worked with his sixth and seventh different managers in SE25 and seen a switch of goalkeeping coach already this season, you can understand Hennessey’s desire for stability, especially when you take into account what is happening at international level with his beloved Wales.

November saw Chris Coleman call time a highly successful five-year stint in charge of the nation, with Ryan Giggs named as his successor. Hennessey and Giggs’ international careers briefly entwined during the summer of 2006 when the goalkeeper’s first start for his country coincided with the Manchester United legend’s final cap, and similar to finding long-time rival Kiely as his coach, he admits it has been odd taking orders from a former teammate.

“It’s a bit strange but he was a fantastic player and guy, and hopefully now he can come in and get us firing like Chris Coleman did,” Hennessey added. “I was lucky enough to have the opportunity to play with him in my first qualifying game against the Czech Republic. We drew 0-0 so it was a good day for me because I made my competitive debut but that was his last game, so a lot of people afterwards were upset but I was still excited!

“Hearing Chris had left was a big shock. We didn’t qualify for the World Cup because of injuries and we made some mistakes during the qualifiers, but we didn’t expect him to go. It was obviously a decision he made with his family and we wished him all the best, and it would be nice to see him somewhere down the line again.

“However, I love that a Welshman has got the job because the passion is there, and he had such a fantastic career and hopefully he can pass on some of that experience to us. We’ve got some very good players coming through and we need to get them in and around the first-team, so I’m looking forward to showing them the roots.”

And if any of the young goalkeepers in the Red Dragons’ squad need to hear about the importance of being patient and taking an opportunity, then Hennessey’s own advice from his time in SE25 will certainly stand them in good stead.