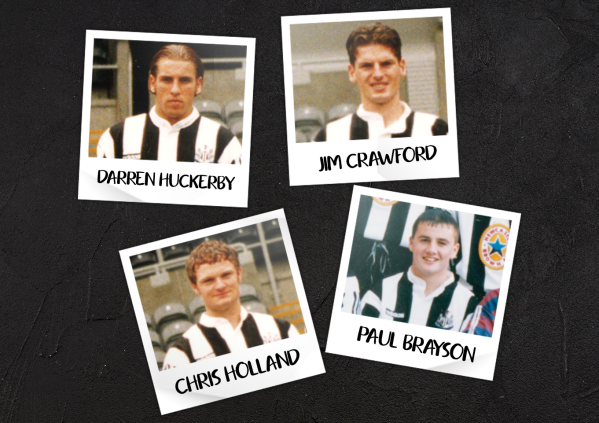 The Newcastle United side of the mid-1990s boasted one of the most revered squads in football history. The likes of Alan Shearer, Les Ferdinand, Peter Beardsley and David Ginola still enjoy deity-like status on Tyneside, a place where Kevin Keegan is still referred to as a Messiah, having come so close to making Geordie dreams come true. On the periphery of The Entertainers were its supporting cast; young prospects huddled together in their own corner of the changing room, rubbing shoulders with club greats as they dreamed of stardom. Now, 25 years on, Chris Holland, Jim Crawford, Paul Brayson and Darren Huckerby share untold stories about the highs and lows of being a part of one of the greatest teams, and indeed storylines, the Premier League has ever seen. 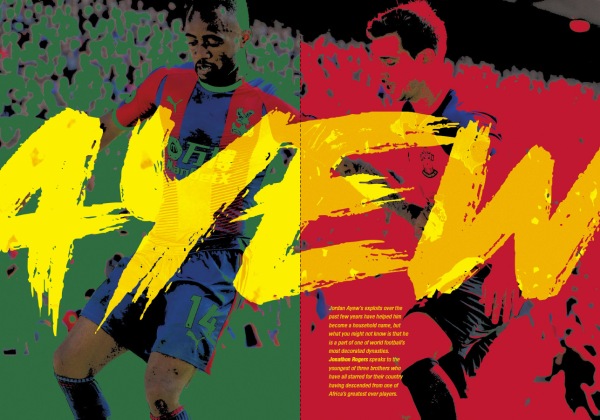 Jordan Ayew's exploits over the past few years have helped him become a household name, but what you might not know is that he is a part of one of world football’s most decorated dynasties; the youngest of three brothers who have all starred for their country having descended from one of Africa’s greatest ever players. 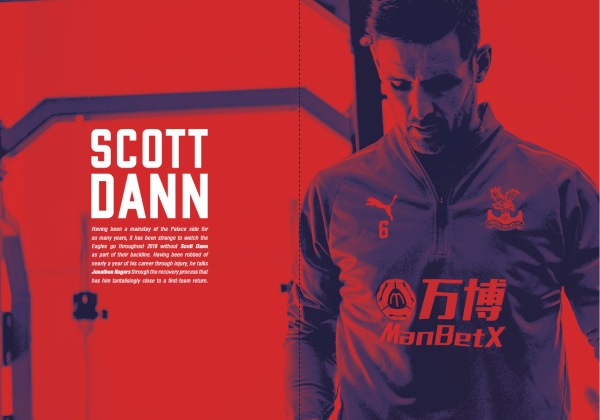 Having been a mainstay of the Palace side for so many years, it has been strange to watch the Eagles go throughout 2018 without Scott Dann as part of their backline. Having been robbed of nearly a year of his career through injury, he talks through the recovery process that has him tantalisingly close to a first-team return. 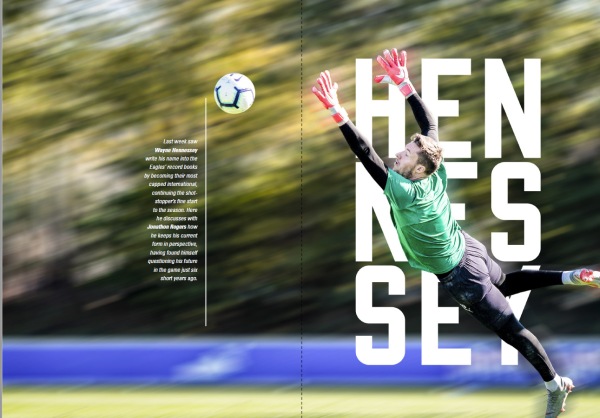 Last week saw Wayne Hennessey write his name into the Eagles’ record books by becoming their most capped international, continuing the shotstopper’s fine start to the season. Here he discusses how he keeps his current form in perspective, having found himself questioning his future in the game just six short years ago. 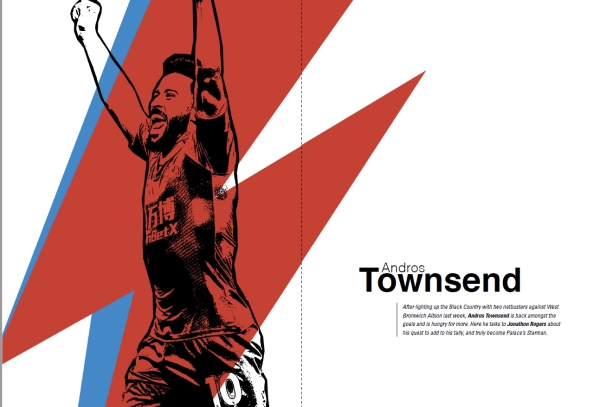 After lighting up the Black Country with two netbusters against West Bromwich Albion last week, Andros Townsend is back amongst the goals and is hungry for more. Here he talks about his quest to add to his tally, and truly become Palace’s Starman. 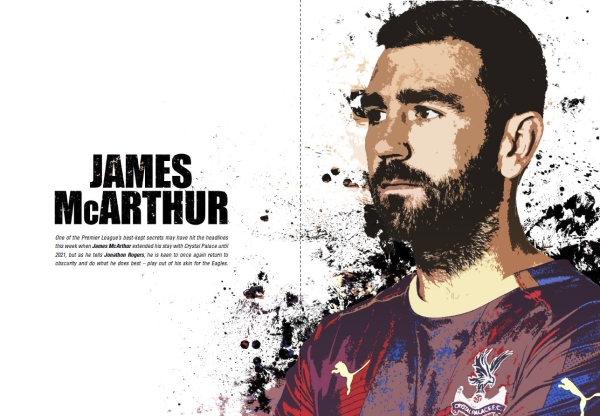 One of the Premier League’s best-kept secrets may have hit the headlines this week when James McArthur extended his stay with Crystal Palace until 2021, but he is keen to once again return to obscurity and do what he does best – play out of his skin for the Eagles. 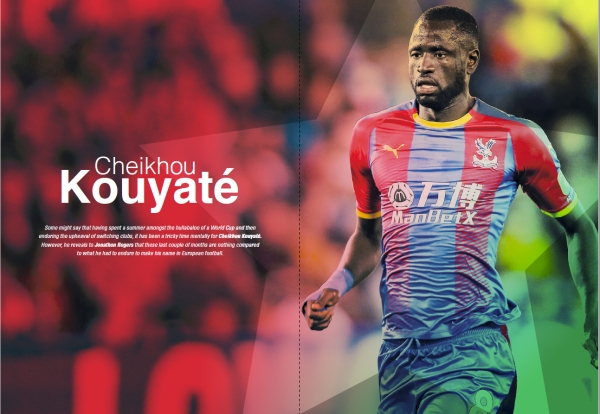 Some might say that having spent a summer amongst the hullabaloo of a World Cup and then enduring the upheaval of switching clubs, it has been a tricky time mentally for Cheikhou Kouyaté. However, he reveals that these last couple of months are nothing compared to what he had to endure to make his name in European football. 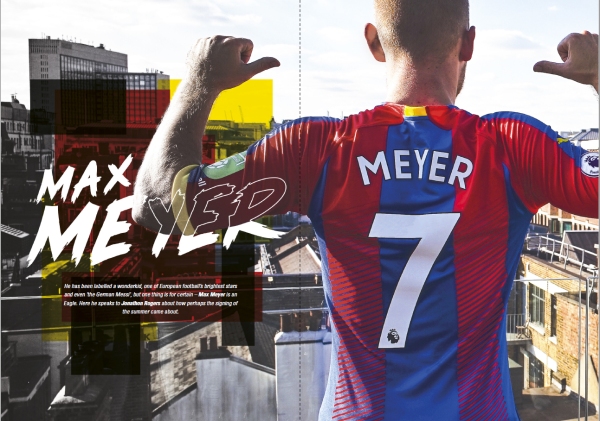 He has been labelled a wonderkid, one of European football’s brightest stars and even ‘the German Messi’, but one thing is for certain – Max Meyer is an Eagle. Here he speaks about how perhaps the signing of the summer came about. 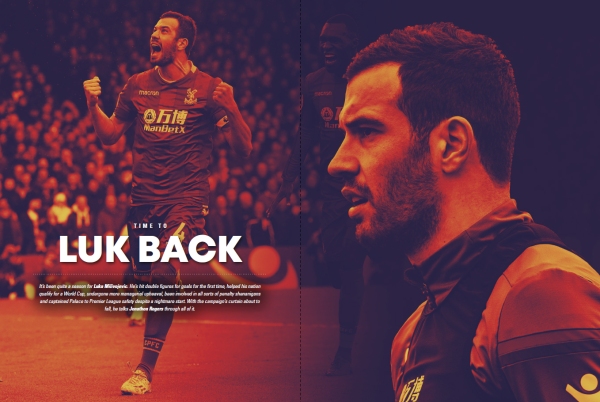 It’s been quite a season for Luka Milivojevic. He’s hit double figures for goals for the first time, helped his nation qualify for a World Cup, undergone more managerial upheaval, been involved in all sorts of penalty shenanigans and captained Palace to Premier League safety despite a nightmare start. With the campaign’s curtain about to fall, he talks through all of it. 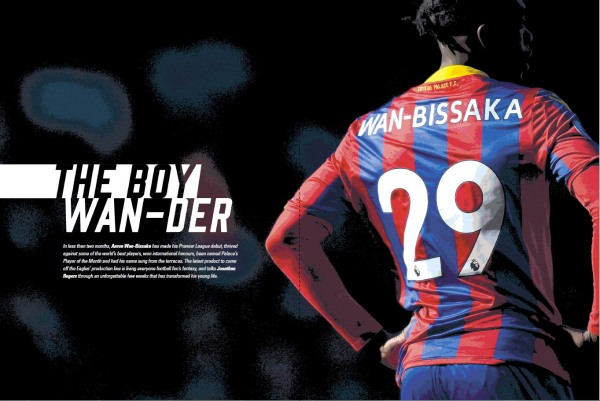 In less than two months, Aaron Wan-Bissaka has made his Premier League debut, thrived against some of the world’s best players, won international honours, been named Palace’s Player of the Month and had his name sung from the terraces. The latest product to come off the Eagles’ production line is living everyone football fan’s fantasy, and talks through an unforgettable few weeks that has transformed his young life. 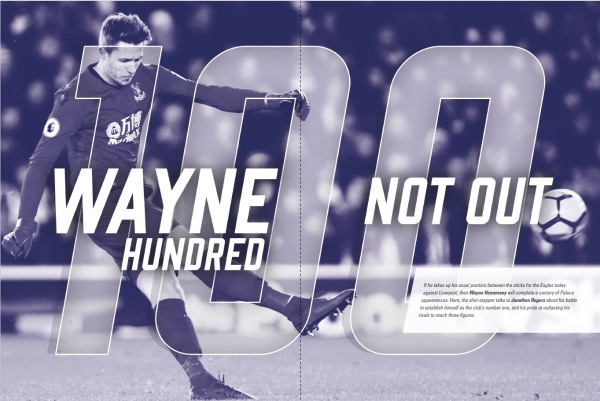 If he takes up his usual position between the sticks for the Eagles today against Liverpool, then Wayne Hennessey will complete a century of Palace appearances. Here, the shot-stopper talks about his battle to establish himself as the club’s number one, and his pride at outlasting his rivals to reach three figures. 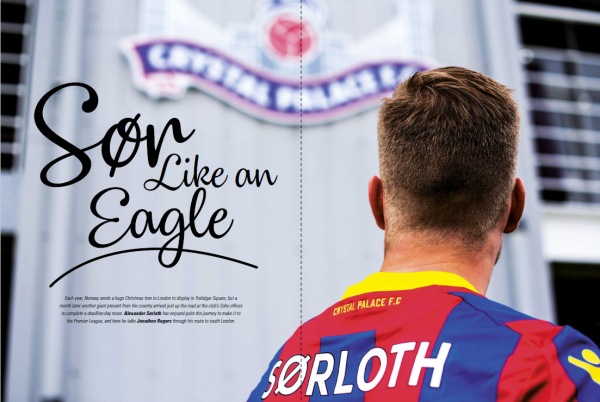 Each year, Norway sends a huge Christmas tree to London to display in Trafalgar Square, but a month later another giant present from the country arrived just up the road at the club’s Soho offices to complete a deadline day move. Alexander Sørloth has enjoyed quite the journey to make it to the Premier League, and here he talks through his route to south London. 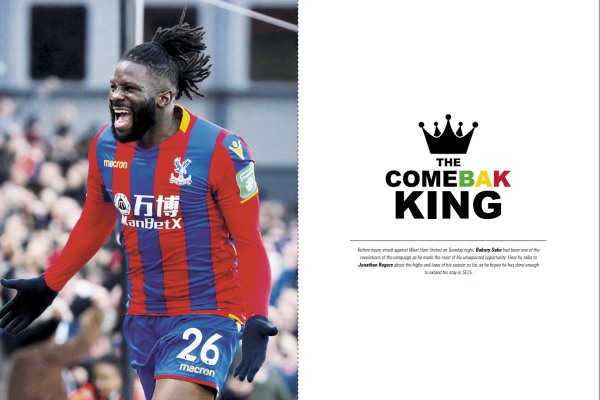 Before injury struck against West Ham United on Tuesday night, Bakary Sako had been one of the revelations of the campaign as he made the most of his unexpected opportunity. Here he talks about the highs and lows of his season so far, as he hopes he has done enough to extend his stay in SE25. 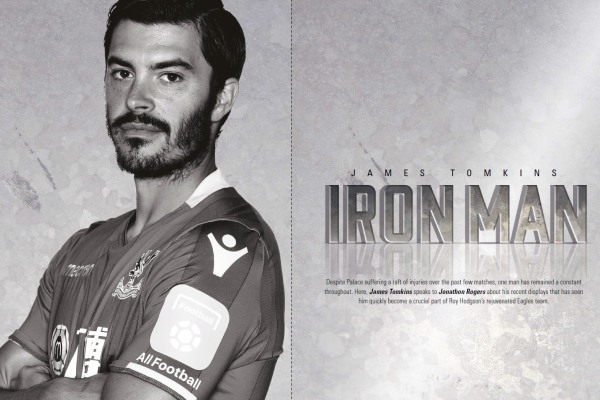 Despite Palace suffering a raft of injuries over the past few matches, one man has remained a constant throughout. Here, James Tomkins speaks about his recent displays that has seen him quickly become a crucial part of Roy Hodgson’s rejuvenated Eagles team. 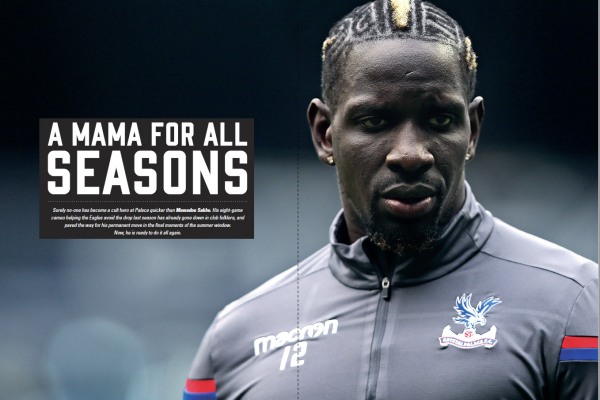 Surely no-one has become a cult hero at Palace quicker than Mamadou Sakho. His eight-game cameo helping the Eagles avoid the drop last season has already gone down in club folklore, and paved the way for his permanent move in the final moments of the summer window. Now, he is ready to do it all again. 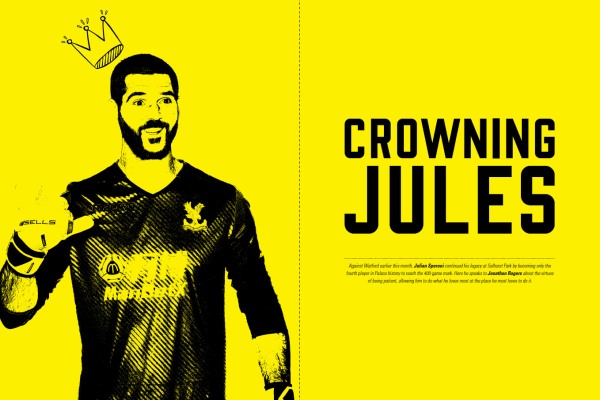 Against Watford earlier this month, Julian Speroni continued his legacy at Selhurst Park by becoming only the fourth player in Palace history to reach the 400-game mark. Here he speaks about the virtues of being patient, allowing him to do what he loves most at the place he most loves to do it. 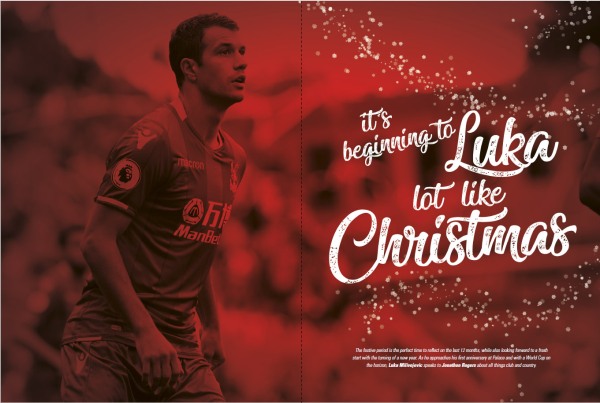 The festive period is the perfect time to reflect on the last 12 months, while also looking forward to a fresh start with the turning of a new year. As he approaches his first anniversary at Palace and with a World Cup on the horizon, Luka Milivojevic speaks about all things club and country. 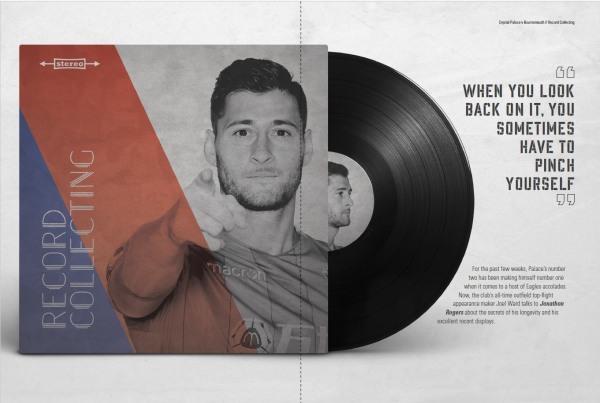 For the past few weeks, Palace’s number two has been making himself number one when it comes to a host of Eagles accolades. Now, the club’s all-time outfield top-flight appearance maker Joel Ward talks about the secrets of his longevity and his excellent recent displays. 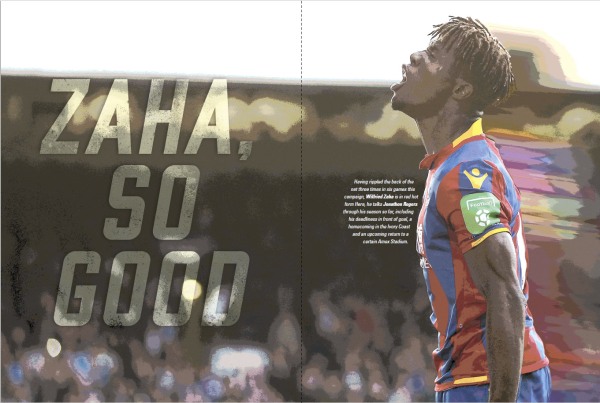 Having rippled the back of the net three times in six games this campaign, Wilfried Zaha is in red hot form Here, he talks about his season so far, including his deadliness in front of goal, a homecoming in the Ivory Coast and an upcoming return to a certain Amex Stadium. 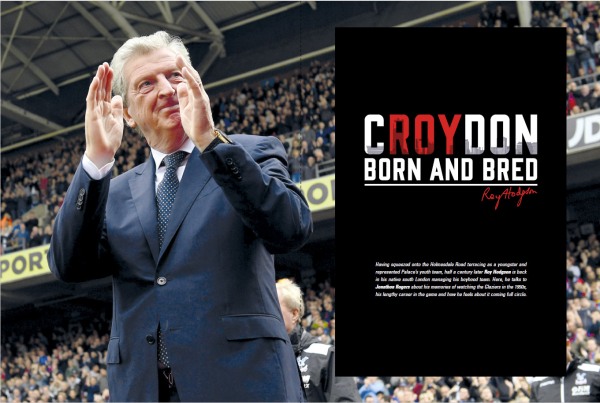 Having squeezed onto the Holmesdale Road terracing as a youngster and represented Palace’s youth team, half a century later Roy Hodgson is back in his native south London managing his boyhood team. Here, he talks about his memories of watching the Glaziers in the 1950s, his lengthy career in the game and how he feels about it coming full circle.