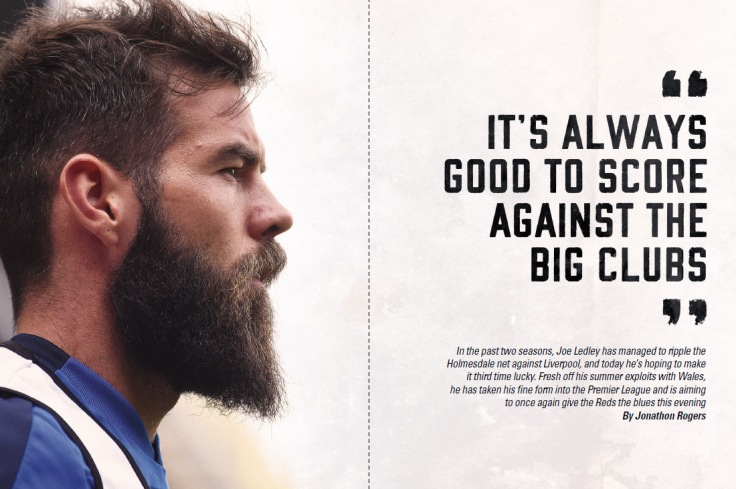 In the past two seasons, Joe Ledley has managed to find the Holmesdale net against Liverpool, and now he’s hoping to make it third time lucky. Fresh off his summer exploits with Wales, he has taken his fine form into the Premier League and is aiming to once again give the Reds the blues this evening.

Today’s visit of the Reds will have been circled in Joe Ledley’s calendar for quite a while. While a lack of derby days with Brighton and Charlton has dampened the summer’s big fixture reveal for some Eagles fans in recent years, the clashes with the red half of Merseyside are always games that the bearded Welshman relishes.

23 goals have been scored in the sides’ six meetings since May 2014 which have featured epic comebacks, the crushing of title dreams, gatecrashing farewell parties and last-minute controversies, all of which Ledley has been in the thick of, proving to be a nemesis to the Merseysiders with some fine goalscoring displays.

There has been plenty to talk about, and there is no better place to start than the instant classic of a 3-3 draw towards the culmination of the 2013/14 season, just four months into Ledley’s time in SE25 following his move from Celtic.

“We were getting absolutely battered and were 3-0 down, really against the ropes and things weren’t going our way,” the 29-year-old reflected. “All of sudden, Damo hit a strike from 35 yards out which took a deflection and went in, and suddenly you could sense that things were going to turn. The crowd got behind us and the next one went in and then another, and we nearly won it too right at the end. That was the last home game of the season and it was a remarkable night under the floodlights at Selhurst.”

Anfield is another venue famed for its electric atmosphere once the sun has set, and ironically a 10-year-old Ledley was in the famous old ground for the first time when he saw Liverpool again squander a 3-0 lead against Newcastle United in 1997. However that night the Ledley family returned to their hometown of Cardiff happy as the midfielder’s childhood hero Robbie Fowler came to the rescue with a last minute winner.

These days, the Palace man is actively attempting to be the thorn in the side of his former idols now his allegiances are firmly nailed to his employers’ mast, shown by his over-exuberant celebrations when he scored against Liverpool for the first time in his career during a 3-1 home win for Palace back in November 2014.

“My brother and my dad supported Liverpool and Cardiff City so I followed in their footsteps,” Ledley revealed. “I watched them play Newcastle when I was younger when they won 4-3 and Fowler scored the winner right at the end – that was a long time ago now though! I managed to play with him at Cardiff and he was a fantastic player, always scoring goals. Steven Gerrard was a legend too – they’ve had some brilliant players down the years. That’s in the past now though, my team is Palace and you just need to be selfish.

“Therefore it was a dream come true to score against them, but when I went to do the celebration on my knees I got caught in the grass and nearly bounced out of the ground, so I won’t be doing that again! That was another shock and a brilliant game; we were really under pressure at that time but we turned up and got a great win.”

It would take until May 2015 for Ledley to complete the transition from Anfield’s stands to its hallowed turf, with his first appearance at the venue coinciding with the final one for another player he admired as a youngster. Gerrard and Ledley went toe-to-toe in the middle of the park, immersed in a carnival-like atmosphere as the Kop paid tribute to one of its favourite sons, but Palace played the role of party-poopers by putting in one of their best performances of recent times to win 3-1.

“That was a remarkable occasion for Gerrard and what he’s done in football and for that club,” said Ledley looking back. “It was great to be involved in, not just for myself but a lot of the other players felt the same. The result though didn’t go his way but the atmosphere was amazing, not just from the Liverpool fans but Palace’s too. I shook hands with him at the end and congratulated him on everything he’s done.

“It’s a great place to win at due to the tradition of the fans and how tight the stadium is. It’s always a difficult place to go but it’s an event where you want to show how good you are against good players.”

With a first ever league double over the Reds claimed, the Indian sign was firmly on the Scousers when another boyhood fan in Scott Dann clinched victory for Palace on Merseyside a few months later, and the trend looked set to continue when the teams last met in March as Ledley found himself in the right place at the right time to hand his side a second half lead.

However Christian Benteke’s stoppage-time penalty would hand Jurgen Klopp’s team a controversial 2-1 win and finally lift the curse, but with the Belgian striker has attached blue stripes to an already-red jersey, Ledley hopes that Palace can continue to be a bogey team for Liverpool, while eyeing a chance to seal a special hat-trick of his own.

“It’s always good to score against big clubs and I’ve managed to do that twice against them. That day [last season] I just hit it and it went in the bottom corner so I was buzzing – but this time no knee slide!

“For some reason I just manage to score against Liverpool. They’re one of those teams where you try things and they come off; you need a bit of luck in football and that’s what’s happened to me against them. If I’m in the starting XI then I’ll definitely be trying to notch again.”

You wouldn’t bet against that if you have been keeping an eye on Ledley’s displays this term, which have been rewarded with an extended stay in Alan Pardew’s line-up despite plenty of competition for midfield berths. Still basking in the momentum garnered during Wales’ glorious run to the semi-finals of Euro 2016, Ledley admits his experiences in France have helped boost his club form, and now he is arguably enjoying his best spell in red and blue.

“It’s good to be in the team and playing more this season, and I’ve been quite happy with the majority of my performances,” he said. “I have belief in my ability and I showed in the Euros what I can do for Wales, and I’ve never doubted that. If I didn’t think I was good enough to be here then I wouldn’t be here. There’s good competition at this club which you need and we’ve got a good mixture.”

It’s easy to forget that Ledley almost missed the summer spectacle due to a fractured fibula sustained on the final day of the season against Stoke City. Forced into the periphery as a spectator at the FA Cup final, he was determined not to miss out on another career highlight, especially having played a key role in helping Wales reach their first international tournament since 1958. Miraculously, just 35 days after he limped off the Selhurst pitch with his dreams in tatters, he defied medical science by coming on as a sub in Wales’ opening game against Slovakia before going on to start every other game. 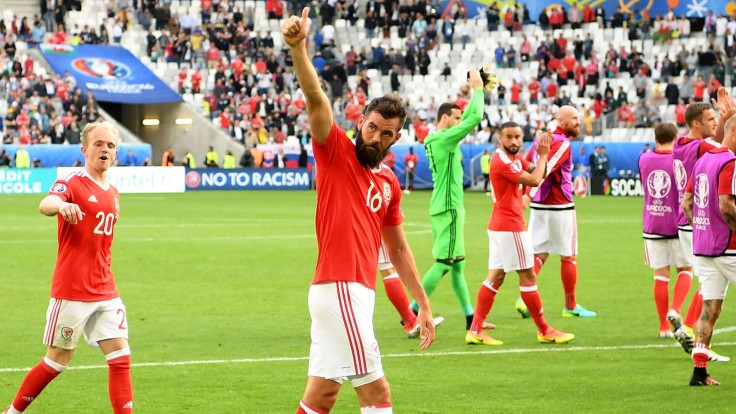 Describing his thought process, Ledley admits he was initially in a grave mood: “I was gutted and I didn’t think I would be able to make it, and without [Palace and Wales] physio Sean Connolly I don’t think I would have. There was a lot of dedication from myself and Sean; I was leaving the house at six o’clock in the morning to use the oxygen chambers and I had to stay in that container for an hour and 45 minutes each time. Then I would begin on the bike, do some jogging and weights and get in the pool. I just did whatever I could that would be beneficial.

“Sean knew the programme and what I needed to do, and the plan we had was perfect. He got me in when there were days off for the other boys but I still had to come in and train, so it was non-stop but it was worth every minute. To come on in the first game of the tournament – which we had ruled out for my return – at 1-1 and be involved in the winning goal was the icing on the cake for myself. We can hold our heads up high as a nation, we loved every minute.”

From rock-bottom to the top of the world in just over a month, Ledley continues to go from strength to strength for club and country, with no sign of slowing down. If he once again gets the nod to start this afternoon, then Liverpool have plenty of reasons to fear the beard.